Loved your Nokia and functionality it provides in cost effective ways? Hated the way Apple keep their products pricy and costing bucks from you for updates? Wish to feel that what’s special about well pronounced multi touch and phenomenal iPhone browsing experience? Don’t want to limit yourself with a pricy phone without some very basic functionality? Finding ways for getting an iPhone experience packed with apps in lesser costlier ways? Why don’t you try iPod Touch 3G with some of your already beloved wi-fi Nokia? 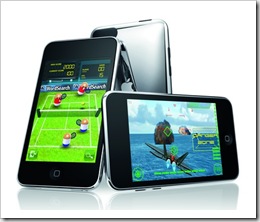 Seen iPod 3G 16GB in hands of colleague and sure got surprised that if its the so hyped iPhone. Though it came out to be iPod, I kept on hearing from long, but never took the same seriously. I think what I had seen till now were either iPod Nano or iPods from other manufacturers, that’s why I didn’t ever thought about this thing otherwise, it sure seems attractive.

Honestly speaking, I never had been with Apple’s any product because of their erratic and absurd marketing strategies. First they release a product with so much hype and then when one get closer then end up with so many compromises than he/ she already might be getting from other devices in same or lower segments. Moreover, there are always ways left to cost bucks from consumers pocket from absurd terms like paid upgrades to unlock the new enhanced capabilities (already existing but not revealed since start) from the same device. Have you seen anything such from anywhere else?? Not even Microsoft does things in this way!!! Crap!!! I am sure that the same is to be continued with iPod 3G, which doesn’t has a much rumored camera, although some mentioned that it was a last minute change and anyone could find even a camera slot inside and a similar rumor that the device has FM Transmitter-Receiver built-in waiting for some paid update to unlock the same.

At one side, Google offering almost everything for free, Nokia offering you all for insane prices even offering products for free trial, Microsoft offering amazing things within their software and in the same world Apple is. Crap!! Crap!! Crap!!

But still apart from lots of annoyance, no one doubt that it’s attractive in looks at least, either it’s be browsing experience or most eye-candy it’s slim and minimalistic looks. We really want to get one even after knowing that we can’t rely on it for our all needs. We feel ourselves little irritated that why don’t Nokia come up with something slimmer and big like this, but can do nothing.

We could get really a good option with iPhone 3G’s wi-fi, although not sure about that if Google Maps inside it could work over Bluetooth connection enjoying nearby capable Nokia Handset with GPS chip. But only Wi-fi itself with attractive price could open ways for people crazy about technologies.

If I put it in ways as Rahul did, then it will be like

Confused!!!, but iPhone lacks this much about normal features that it remains as more of a play toy only not a smartphone and one can’t really sustain with it as full time phone in India (thanks to Nokia for making us over-demanding). Better to have a full time toy, if you really wanna own one. I find this combination more attractive for people, who already own some wi-fi Nokia.

Think of the profits if offers:

Possibilities are many; question is how you look at them. Let me know what your opinions on it.