This time I really wanted to go for a review with sleeves off, so thought to take my time (though reasons for delay were office related, personal etc as well). But here I am back again. This time, I have decided to take the things one by one rather than summarizing things in one or two posts.

Here is my take on Hardware first.

Build is kind of perfect except the sliding mechanism as I mentioned in earlier post. Device seems solid from every side and even no components out under the battery. This time, I was not scared from opening the battery cover as just a side uplift for the same (its steel). Keypad layout is the same as was of N900, so I am happy about it, but one complaint was there and so is here about dedicated numeric keys. After all, its a phone first, touch way is nice, but somehow if dedicated numeric keys were there, then it was more of a phone. The 1200 mAh battery is so thin suiting to slim dimensions of cell. Sim slot mechanism is so cool, but I fear about loosing the metal plate (like I have lost hook of my BH-212 bluetooth headset). I really loved the way it has been built coz it didn’t make you feel that it has a full hardware qwerty keypad with it waiting to slide out. 😉

Check the pics given beow. 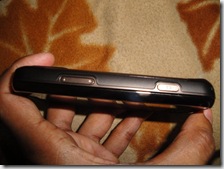 Part of RISC family, ARM processors are part of most of embedded electronics now days. ARM architecture was suitable for smart-phones for their higher clocking capabilities and low power consumption. Nokia took ARM architecture ahead and other players followed. Though now, we find Snapdragon processors clocking at 1GHz from same ARM family, but who might have seen power of even 600 MHz ARM Cortex A8 clubbed with PowerVR SGX graphics, would sure like to wait more. Yes!! the widely used 434 MHz one seems a bit outdated now, but still it stands better than the average if not the best ones out there.

Earlier released with 369 MHz, same Nokia 5800 shows 434 MHz now, I wasn’t really sure that both have the same processor or different ones. Little deeper dig told me that Nokia 5800 had different one named Nokia Rapido YII3E (kind of over clocked now) and iARM 1136JF-S sure has better capabilities. Not everything shows on specs. Check ARM official website.

Where N97 Mini lacks with other leading smart-phones of now days is dedicated graphics. it still without something like PowerVR SGX graphics that’s a let down for sure.

This is the area of enhancement in N97 Mini over Nokia 5800. Nokia 5800 had only 73 MB out of 128 MB RAM accessible, while it has all. There was 256 MB ROM with only 81 MB available for users and now with N97 Mini it has 512 MB ROM with 280 MB accessible for users. Nokia N97 has a secondary ROM of 8GB in addition for all kind of usages, while still supports microSD, microSDHC, TransFlash, High Capacity (SD 2.0/HC) memory cards with capacity of up to 32GB. Yes!! I know greedy like us still cry loud for 256 MB RAM, but greed never ends.

At cost and performance side, then having an internal storage in GBs is sure the best for performance but ask for cost as well. So, the same justifies the cost of N97 Mini in a way.

I am really not sure that whether both the display unit is the same as was used in Nokia 5800. Considering the price, they should have increased the resolution at least. It seems a bit more responsive than Nokia 5800, but that should be due to better OS and processor I guess. Moreover, I noticed that N97 Mini has something wider about display. Don’t know what it is, but its there for sure. May be some OS enhancements made that way or something else.

I always been in love with my Nokia N82 5 MP Camera with Xeon flash and even after using N900 for a while, my faith didn’t broken that Xeon flash was something out of world. I was kind of totally disappointed with Nokia 5800 and sure Nokia N97 Mini seems brighter on this time. I am really surprised that even with Led Flash, it manages really good snaps otherwise I was so much in love with Xeon that never thought anything else could give something like this.

With this camera performance, it really justifies its price as Nokia N82 must be around 17.5k now days, I guess.

Carl Zeiss optics been a blessing for Nokia because of its performance. As about the base technology, then I know that CCD one that is used in the main stream digital cameras will never make it to smart phones as they consumes a lot of power, though produce high quality of pictures, while CMOS ones will be susceptible to Noise even at the best. But practically, you can see that its totally acceptable for a non-professional to completely live and love his smart phone CMOS Censor based camera. 🙂

Though I am not sure which chipset it usages but I assume that it must be SIRF III like most of the devices. GPS really been a blessing and addition of Voice guidance by Nokia makes it something like part of life. I am still disappointed that why not free navigation made the way to my beloved Nokia N82 yet or will it ever? I know prices are slashed for navigation, but still …. Addition of Compass makes it so cool and accurate; something on another level. Sure faster than Nokia 5800 and Nokia N82 when it comes to locking and I still feel better than Nokia N900 due to so naive Ovi Map software there. Moreover, better performing Ovi Maps due to improved memory and prosessor I guess otherwise N82 has started troubling with new version of Ovi Maps. Adding a video from boybandreject00 for overview

Limitations of GPS technologies aside, its like integrating all your travelling needs like Camera, Music, Internet and GPS at the same place. Limitations are like .. I think it doesn’t sense that we are over some flyover or below that or obviously doesn’t get updated about if route are changed or temporarily blocked by authority for weeks. May be in other countries situation might be some different, but in India, it is fact.

I come to read somewhere that when it comes to specifications, then Nokia likes to tick all of them, so is the case with Nokia N97. It drops Infrared and HSUPA support, but still have plenty of super fast connectivity options for utilizing its connected widgets.

I really feel that connectivity on the go is an era where Smart Phones beats Laptops, Netbooks and computers. Though N900 is a revolution of its kind, but still many coulod manage their works with a Full qwerty keypad and nice screen with all time connected fast web. Only issue was with switching so many available options, then Nokia is improving in this area with each device. While I find Nokia N900 the smoothest, N97 Mini also seems to have avoided most of the connectivity glitches.

When it comes to Multimedia, then Nokia always been a champion of all and my expectation are much high after having N900.  Still my demands will be the same. Find some way to play all kind of media files. Not a rocket science and could be done via any firmware update. I guess what needs to be done is negotiation with various format providers. Next annoyance is to use Wired Headphone for FM Radio. Why? What about Bluetooth Headset? Please drop this requirement …

I wish if FM Transmitter was part of the deal.. I was having no issue in buying this right now.

It fares well for whole day operations, but I really see no point in removing the earlier 1320 mAh, which was there in Nokia 5800 except the fact about size. But when Apple and other could make slimmer batteries, then why not Nokia? I really see no point in reducing the battery at least, as powerful battery might be, it would be more appreciated. May be some price concerns, but don’t make compromise on battery at least plz!!!.

So, here I am finishing my first round of review for Nokia N97 Mini. Will be back soon about other things. Join the conversation and suggest me more.