Its really hard to cope up writing everyday while you own busy personal and office lives, but here I come again, keeping my promise at least for the first day 😉

First starting with the issues related to  Connect PC to Web Mode. After a day, now its a little easier to connect, but what I have figured out is this

Anyway, end of story,now I am able to connect well but may be need to figure out what are the manual ways, so troubleshooting (if ever required) would be easier.

Might be  the case that I was not that into home screen customizations with Nokia N82 or Nokia 5800, but home screen of Nokia E72 seems quite fascinating. Well built professional look keeping things low yet effective enough.

You could see, how much informative the little screen is. More of it, things are much customizable for almost everything here, after all its a Nokia.

Right and left Menu could be set for any of the app, so are the apps on the standby screen (first horizontal row). The vertical row get chosen from 15 options and though you are allowed to configured at most 10 email accounts through Nokia Messaging, but on home screen, you could choose any two of them to get displayed (one will be called as primary mail and the other will be called as secondary). By the way, Nokia Messaging works flawlessly and I think only delay between getting your mails might be of 1-2 mins. More of it, the way it renders the mails is also much efficient. You may expect another review of mine around Nokia Messaging soon.

Once you rover over the SMS notification or Missed call notification, its shows you info without even opening SMS inbox or Call logs in form a lightweight pop screen. Same you could choose from setting for any of the mail account or both of the mail account and then when you will point over the account, it will pop up a little note showing sender, subject and time about unread mails only. Definitely, business class.

Though I am not using the same, but there is an option for mode switch (right top of the screen in pics, could be customizable), which may be used to switch from Business mode to personal mode. It means you will have two home screens that could be customizable as per your need, with different preferences and different themes. Sure a good idea for people, who don’t like being boring professionals all the time, probably Nokia E72 is all about such people only.

The third point to notice was Typing on Nokia E72:

Yes!!! we all have seen and heard about the legendary keypad of Nokia E71 and Nokia E72. They have really became kind of benchmark for this shaped Smartphones in real. So, what’s more about them?

We get the numeric keys in the middle in the similar way, we always had in our old Nokia phones except the fact that ‘*’, ‘#’ and ‘0’ keys are on right side this time not at the below of the keypad. Interesting additions are ‘Enter’ and ‘Ctrl’ keys at right bottom. Just above them there is also a backspace key, which works for cancel/ delete key (as were in older Smartphones). Good is to have keys like ‘@’, ‘?’ and ‘!’ directly on single keystrokes as these one go quite of importance while typing business mails, though I missed an ‘_’ key on one or two strokes here, but you cant please all in such a small space. Rest of the symbols are under Symbol key that uses the same pattern of keeping recently used symbols in first line.

There are other functions on long press of keys as well. Though I am not yet aware of them all, but as you could see yourself, long press on Ctrl Key make music muted/ unmuted, long press on Symbol key makes Bluetooth on/ off and for making many people out there smiling, long press on space key makes your Led Flashes on like a white light torch. Don’t know how that would go over the battery, but the light of the torch is this much good that you could use the same for studies for a while. 😉

Really the space provided for Keypad seems to be very very efficiently utilized and remains as an inspiration of design for other companies coming up with their QWERTY models.

Yeah!! as one should expect, if you start type a number directly on blank screen then it takes numbers as input and if you type on some SMS or Mail, then numbers go behind to be secondary keys (activated via function key at the left bottom). Seems a natural thing, but keeping the natural thing working well in design is what make something likeable.

Next lovely things that I experienced first time in Nokia N900 was again back here; predictive typing. Yes! there might be dictionaries in other models as well and predictive typing might be kept on in other Smartphones as well, but these two experiences were only two that felt practical too me. In start, suggestions might be little annoying sometimes, but it learns really fast, like which words you used, what spelling you use, which are the name, everything goes really natural the way Microsoft Office does. Auto Completion of words is something hard to forget or to be without once you get used to of it.

Not to mention like other ESeries models, we have full version of Quickoffice (Editing and creating new documents allowed) here compatible with Office 2007 files and so for Acrobat files as well. 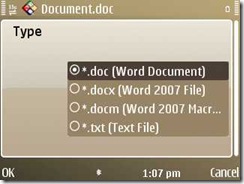 Interesting was to see the informative view of SMS inbox, even better than S40 devices view that I always loved.