Un-boxing done, few pros and cons done, now it must be time for detailing things a little and time to share my journey experience with Nokia E52.

Nokia E52, the latest member of E-Series might surprise to many because in now days, when everyone seems to running behind the QWERTY keypads, Nokia decided to come up with a T9 Keypad. The reason … as I think sometimes business people like to use cell phones more with one hand only rather than using both the hands as QWERTY keypads might be forcing them to do. Definitely it feels solid in your hands with its metallic finish and compact looks.

The official specification page reveals all the details one might wish to take a look up on but I am listing here the things I liked most about the device and taken the decision to buy the same for my youngest brother. Feeling same about this device as once I felt about Nokia N82, a decision that I would never regret.

The best points about the device …

Definitely fitting best of the powerful features in such a reasonable price might not have been a simple task. I should say that its more value to money than Nokia 5800 been once coz best of connectivity and best of battery life is the only thing that matters at the end of everything.
Some might even feel like praising the T9 Keypad as well, which feels very solid in your hands more solid than any other T9 keypad from Nokia I think.

If compare with Nokia E72 then other than QWERTY, you have lost the Optical Navi-wheel here and also a dedicated key for contacts, but its brilliant that they managed to keep total eight buttons with Five way scroll in such a small place. Good job Nokia!!
I should also be honest about my opinion here as well. It doesn’t have all the things as excellent as CPU, Connectivity or OS is. There are some minus point as well.
Minus points about the device

I wanted to repeat again, mention of only 60 MB ‘available’ user memory (even if it doesn’t affect the performance that badly as it might sound) will keep potential buyers thinking many times before buying the same otherwise, it must have been a great news for people waiting desperately for Nokia E5.

In all, this is a superb device for the real users, who want their work done at best rather than just showing off and want to keep it economical at best. I could assure you that in current date no one is providing such a power packed device in this price (Rs. 11, 900/-). For demanding users who can’t live with only one device, if earlier Nokia 5310 XpressMusic was my best bet for a backup phone, then now I will recommend this only.

If you have your eyes on a new Nokia N8, the time is getting close. The countdown timer at the Helsinki HQ of Nokia reads 44 days and 7 hours until launch. 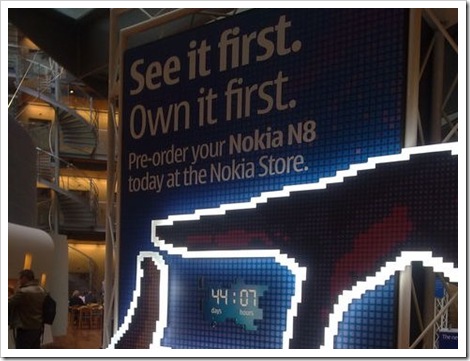 No I am not late to the news, thanks to Twitter, I was well aware of the same announcement once it was made about the deal between two major players Nokia and Yahoo, but at that time I was in journey and now after reaching home, was busy with parents and purchases, didn’t got a moment to comment on the same. So, joining in now ….

For the people, who don’t know about the news, here are the words …

May 24, 2010, Nokia and Yahoo officially spoken about the deal that was already being speculated with code name Project Nike. While earlier it was expectation that Yahoo! will come up with things like revoking old relations like Yahoo! Go Mobile (which were once backed by Nokia and later were vanished from the screen), it came out something bigger than that when both of them announced that from the second quarter of the year Yahoo! Maps will be branded as powered by Nokia while Ovi Mail and Chat etc will be branded as powered by Nokia.

For the simple logic, I must say that it seemed making some sense. Currently only Ovi Maps seems to handling the tag of being only competitor of Google’s Map offerings and perhaps in a way seems to be best selling point for Nokia Smart phones now days on the other hands, even if facing tough competition and somewhat getting weaker day by day, Yahoo! mail and some of its services still has a firm presence in market (In fact, in America still Yahoo is the most visited site) and definitely capable of doing much better than currently Ovi Mail is doing, which only seems to serve purpose of news only till now.

But the question is that what change does this deal going to make and is anyone excited about the same? Why not? Why not deal  between such two big companies making a huge buzz that would have been here if Google and Nokia might have signed a pact?

I come to read somewhere that someone said that two losers don’t make a winner. Sounds true as Yahoo! loosing big time on grounds of maps and Nokia struggling at its best for pushing Ovi Mail, contacts and chat to its customer base. Both already have tried on their level best, but didn’t got some improved results themselves. But still their joining hands doesn’t excite, at least for Nokia fan base.

Is the deal of some worth to Nokia?

Yahoo! is getting irrelevant day by day, but its not the case with Nokia.

People might have been saying that Apple and Google eating up share much faster than anyone could have expected and soon Nokia will be forced to remain mute from Smart Phone market, but neither me nor many of likes will find it reasonable. Nokia still getting strong by providing best value of money at all the level, still they are the biggest manufacturers in the world and release of sets like Nokia N900, Nokia E72 and Nokia N8, nothing seems to stopping them in near future as well. Ovi Maps have became part a normal Smart Phone user’s life, while Nokia Messaging after some early hickups now seems to getting steady to beat RIM offerings.

Yes! the only places their Ovi services seem to be failing are mail and chat. Its been long since they tried hard to push these two services (their chat app only enable Ovi for Voice talk or Avtar showing capability), but it doesn’t made any sense till now. But is a pact with Yahoo going to solve any issue? Does Nokia really needs Yahoo at this point? Are you announcing your weakness in loud words?

My voice is not new. Many might have been disappointed with this deal. Many voices have sent negative concerns. What innovative one finds in this decision? If Nokia might have taken over Yahoo! completely then it would have made sense, but now it seems that Nokia thinking to keep itself limited to manufacturing Smart Phones and leaving the whole of its internet offerings on its new experienced partner.

Definitely a big disappointment as we have not much hope left as far as Yahoo is concerned. With Yahoo! Go, yahoo was ahead of its time, thinking more seriously about the mobile services and this new emerging market but their miserable failure pointed that they lacked of innovations somewhere, only which is badly needed to Nokia right now. No one is expecting neither anyone assured them that this deal will offer users something entirely new. Ok! people are not using Ovi Mails, but how many are using Yahoo! till now? or even if some then will anyone new will start coming toward it when Gmail and Hotmail still offering best of the things?

The deal might give some life to Yahoo but for Nokia, it seems to end up as a bad joke only. Definitely its not that what Nokia is looking for.