“Can you sell a comb to someone completely bald and who might even know the fact very well that he can’t get hairs now?” – perhaps the most famous, funny, but very true lesson of marketing. Thanks Steave for being here and making us realize the basic lesson again.

Apple shares got a 2% drop after the launch of iPhone 4, while many might have expected it to rise at the moment. Yes!! sure you could relate it with other factors and also could come up with that even Google seen a drop, so I should leave it here only… to let you think yourself. We just got the same what Gizmodo already predicted but still … Enhanced resolution, Video calling, a new OS, HSPDA/HSUPA .. everything we know already and have used but still Apple is always the ‘first’ …Iphone4? for 5mp non-carlzeiss? Paid video editor? For money eating apps from day one? For Skype’s alter Facetime ? For a price like netbook?

For specs and other things, you could leave the page and head to GSMArena link or anywhere else. No need to read it more from here.

Here, I will talk about basics behind key features displayed on their website, the truth, the innovation, the possibility to beat them or even significance of them ….

FaceTime: Steave is really a marketing genius about inventing terms and I would sure will be much grateful to him, if his this new term could give a boost to video calling. Yes!! FaceTime is just video calling. A feature, which been known to Nokia Customers from ages (though available on UMTS Networks only), just that feature is not on wi-fi, but on GSM Network (Nokia!! sure its your failure to miss this simple thing). If you talking about Wi-Fi, then Skype is already on Ovi Stores, to work on not only wi-fi but on any internet connection like 3G or EDGE. 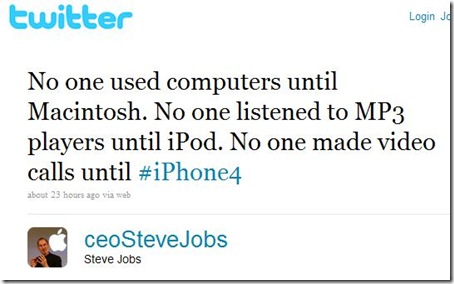 Someone please correct me, if I am wrong to think that its already there from long

Jokes, argument and babblings aside, sure its a new thing even if it existed here in another form from ages. I am not sure that existing Video Calling or Skype making use of both the cameras with the same ease. As much I know.. its truly the first. Not for the technology, but for the innovation as Steave always called for his company. If I loved Nokia N900 for integrating Contacts with web contacts like Gtalk and Skype, then sure iPhone has reasons to be loved for extending the same even further.

But question is.. are people really using it? Aren’t Apple itself hesitated, that’s why it launched over Wi-Fi only? Are you really offering such a price that many could buy it? What’s point of being on twitter, if you are following just few and just few following you?

Definitely Apple iPhone 4 gets a +1 here for the innovation, not the technology and this makes the first challenge to Nokia, Are you ready to take the challenge or just adding and removing Skype will be your way? This sure not leveraging the potential could be explored.

Retina Display: This terminology really got me smiling that night. Sure, its the biggest resolution 640×960 on phone screen till date (though Nokia N900 was not very far with 800×480 resolution), but Steave really knew that how to present the same fact more impressively rather than just listing the numbers. More pixel counts… we techies understand, but common fans understand the way Steave tells.

But point to think is that how much resolution really matters? It was more better, if Steave would have announced the support for xVid, divX and all such formats natively like he did for PDFs. Without that… tell me what you really gonna do with those thousands more pixels on just a 3.5” device? I have not found any reason yet with current capabilities of iPhone4.

Needs are at a side as they could be generated over innovations, but still I’ll call it a  +1 more for Apple, no reasons to deny it and the second challenge for Nokia, why a step back from the spectacular resolution of Nokia N900? Its same way pathetic like Apple’s bringing basic multi-tasking only and calling it ‘feature’.

Yes! we understand, given the price point, its not the flagship actually and we need to wait for watching the real thing, Nokia N9, but still it doesn’t make sense to give such a ‘poor’ resolution to a device capable of snapping 12MP pictures. I guess Nokia lovers should thank Apple to hit Nokia hard on this point.

Multi-Tasking: This remained as biggest surprise to me that why Steave didn’t thought some special term for Apple kind of multi-tasking.. Lol!!! There will be always a slight demarcation line that till when you actually making people know what they want and when you arrogantly think that you know what they want. Multi-Tasking is bad as it drains battery.. Bullshit!!!! Steave went diplomatic over Multi-Tasking and it already cleared that how far iPhone 4 will go in comparison of Nokia over this.

Apple gets a -2 here or I could have given more less if they wouldn’t have admitted the need of multi-tasking even now. You are no way closer to the multi-tasking  as we know it. Check the video of even much old Nokia device, N82 multi tasking in action.

HD Recording and Editing: I am much happy that Nokia answered the same on very next day. HD recording.. something only for which, I bought my Sony Digital Camera in around 20k. After removing the need of Digital Cameras at all, now only this was remained. Digicam what digicam?

If its been pathetic on Nokia side to step back on resolution thing, then same way cheapness for Apple for keeping the video editing iMovie on a cost of $5 ? Insane.. probably like people would have called when Microsoft asked price for their DOS. May be Steave thought the same and sure developers have right to earn for their work, but still the way, buying an apple means keep on paying, its sure not that great value for money and sometimes even much frustrating too like this.

Nokia gets +1 here and sure it was way beautiful to answer Apple by releasing the video editing app video on day next to iPhone 4 release.

5 MP Camera with Led Flash: Might be a good news for Apple fanatics, whatever hard Steave may try to say that Mega Pixel doesn’t count. We all know what’s worth a nice camera is. Single Led Flash? Some joke? Leave N82 aside, even an Nokia X2 offers 5MP with single LED.

Steave better not say anything over this. You are not even there to compete Nokia on this ground. We will see, if iPhone 4 could produce pictures even better than my Nokia N82.

Nokia gets +1 here and even a bonus +1 more. Look like we shouldn’t expect Apple to compete on this before iPhone7 at least. LOL!

Design and Looks: Definitely only this been a huge plus for Apple and their most of thing circle around the same. Even if they compromise over something then it has to be due to necessity of keeping the same sleek look that even buy hardcore Nokia Users like me.

Apple has a +2 here and will always have. Reason.. Nokia can’t go back and start taking decisions over dilemmas like style or sensibility in favour of the first. Nokia has chosen to be all and they should keep their ways. Sure, iPhone 4 might be 3mm thinner than Nokia N8, but if those 3mm brings you 12 mp camera and worth of years trust on your needs, then it worth it and if you are talking about looks then hold your breaths.. did I said that Apple will always be a winner in this department..?? I apologize … 😉

Lots I could have said and lots could been said that what Nokia should do next to counter it, but the released video signaled that Nokia knows what they should do. Still I will mark my words… Nokia you need to give all your guts on resolution next time and video calling required right now.