Though I heard only talks about Ubuntu on Nokia Booklet 3G now, but last night while searching on Intel GMA500 Chipset and its issues with Linux, I got to know via Wiki that there is a Netbook OS based on Chromium and Debian that supports Intel GMA500 natively. Moreover, as a cloud OS, it has own community, you can chat with and a decent App store too for holding even Windows Apps like Skype etc. Well.. it was worth a try for sure.

So, it demonstrate that on Nokia Booklet 3G with JoliCloud out of the box 3G Works, Multimedia works in full force and Windows Key responds to open the menu unlike most of the Linux flavour. I will come back with more updates in the same post after a break.

I should admit that while trying and posting my thoughts for the first time about JoliCloud, I was kind of thinking that I am one of the few to try it, but when collect info from some googling then got to know its not a very new thing, though it was pleasing that I got my video on top, when searched for “Jolicloud nokia”

There have been many mentions about JoliCloud in past like

So, its not a new thing, but the new thing, I would like to mention in loud words, is JoliCloud supports Nokia Booklet 3G’s 3G Modem completely and there is absolutely no issue about that. You could check the above video to confirm the same. This video not even using 3G SIM and I just connected it via a normal Aircel 2G SIM in india, connect was slow as expected but was working flawlessly, so please take your words back that 3G SIM doesn’t work over JoliCloud, it does.

You can attach your Facebook Account over JoliCloud login and it will search for your friends on JoliCloud (as of now, I didn’t found any, but I am not a facebook hardcore user as well). Once logged in, you could access an App Directory that surprising showcase too manyof useful apps like Gmail, VLC, Skype, Google Reader, Twitter app etc. Cloud is great.

There are many exciting things about this particular operating system, which I will love to keep on exploring more, though today is probably last day of my Nokia Booklet 3G Trial from WomWorld/ Nokia, but still this OS is really really capable and I find it suiting Nokia Booklet better than Ubuntu. Pleasant was to see the option to change the processor settings, don’t know what effect, but having a new thing was cool.

If you are thinking that it took more than a minute in booting, then leave that thought.. Man!! I was booting from a USB Stick, not a full install, so its obviously a limited preview. 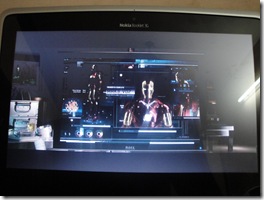 Lovely was to see Multimedia working in full force, even with 3D acceleration out of the box. It played DivX content, Xvid content and .mkv files with dual audio. Just perfect. I was to install Skype from its own App store but got busy in other things, but it sure works over it. Only issue I found was again no default support for UK-79 or US-78 Keyboards. They should have thought of it if making an OS targeting cloud and Netbooks specially. 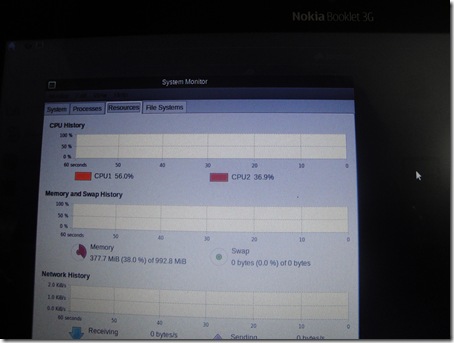 RAM usages were shown a bit extra than Ubuntu (350 MB around), but its providing graphics support out of the box as well. Worth it. Still much lesser than windows one.

Not saying much about this OS here as many details you could find from the site itself or other places, but just wanted to remind you that if you got any Netbook like this, then you have a much better choice. I have shown you just a USB Live Install not actual one, there are many real things still in store, when you install it full fledge.

Did I told you that it supports Multi-touch on touch-pad (though not on Booklet 3G)? 😉 Now think … do you really want to stuck with Windows 7 Starter on Nokia Booklet 3G?

Now you can read updates from this blog delivered directly to your Nokia Smart Phone, download it here