September 14-16, 2010, days that were due to get a place in history seem a little shattered after two unexpected news like departure of OPK and seemingly biggest setback after resign of Anssi Vanjoki today. But is it really as you see it or you still should hope bigger now?

I will divide my post in three parts here: few worlds about Nokia world, what we could expect from Nokia world and finally few words over these disruptions happened just before the days.

Nokia world been the biggest date for Nokia in last all years. Nokia lovers and bloggers always keep on waiting for this date. Last Nokia World events been marks of Nokia N900, Nokia Booklet 3G, Nokia X6 likes. Always known for displaying new devices, definitely, Nokia World sure has so many reasons for making people to hold their purchases before the big announcements might happen that day.

More than that Nokia world been a place, where Nokia Enthusiasts find a place to meet people, whom they knew from posts but not in person. Many new friendships begin, many new ideas take shapes and many many more memories.

Womworld/Nokia been a bit too busy in arranging the invites and other activities around this biggest festival of Nokia. Though its very unfortunate that due to short notice and VISA issues, two only attendees of Nokia World from India CJ and Dhruv weren’t able to make it, but was that the end of story?

September 13, 2010 and many of us from India started receiving parcels from Womworld …

Yeah! after taking the packet in hands anyone would have been clear that its not gonna be some device inside it, but when I seen Nokia World 2010, then it reminded me of the last event, we shared moments with Nokia. Am I going to see some another cryptic message? One could be dammn sure about it otherwise, why they would have sent such a big parcel? But hey! there was a T-Shirt inside it (And thanks God! this time its not XL size at least, still large but fine) and also was an access card inside saying access to all areas (I swear, I was just saying to my colleague in morning that when I would be having one access card of Nokia).

Not only access card, but T-Shirt itself cool with the tie imprinted on it. 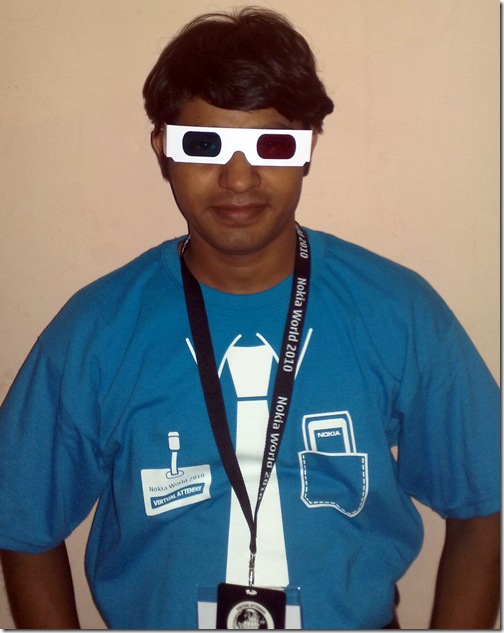 Looking funny? I bet, I was going to look much better, if I was really there.

While, I am trying my best to guess that what purpose these glasses going to serve tomorrow, can anyone else point me out something? 3D glasses? I tried watching some 3D movies in my HDD, but didn’t felt anything .. or may be reason is that I never used any 3D glass ever.

What we could expect from Nokia World 2010

There is really no limits that one could expect from something. We make expectations that they get thrilled if they really come true like it was last time, when we figured out some of the things hours before they could have actually unveiled. This time, its tougher.

Nokia N9 Each pair of the eyes, which are going there will be looking out for only this name, which been under main part of conversations since people started talking about Nokia World 2010. What it would be? What it should be? Is it be exactly like we think? Is it gonna steal all the limelight from Nokia N8 as always bigger devices used to do or Nokia will let N8 live its part of fame for more long?

Nokia Tablet running MeeGo Why not a tablet? After success of iPads almost everyone running into the same game, then why not the company, who could do the best about it. Nokia N900 was sure serving very well as a tablet too. Timing is right and would be more awesome, if they could combine that will some 10” screen and 3D technology that they were working in mid 2009, which will enable people to see 3D content without using any glasses. With 3D kind of glasses in swag, there is a big reason for this possibility.

Nokia E7 The launch of Blackberry torch must have provided Nokia the boost around the fact that people are thinking of touch phones as business phones now. A phone with big 4” touch screen with full four row horizontal QWERTY could be all a business person might be looking for to leave Notebook and Netbooks very far behind. Sure, the timing is right for that.

OS, Services and Apps There was a time, when everyone thought that technology is meant to develop more and more powerful hardware only and then Bill Gates came and changed the whole perspective about software world. Now, its something similar is happening, where we seen so many apps floating around here and there and so many web services. Nokia has to adopt this in one way or another, if their Symbian is not able to adopt, then it has to MeeGo. Question is how and since when? No one wanna hear any other answer than tomorrow.

Whatever you say, no one can deny the fact that timings of these two big departure have caught up Nokia in a very odd time. As you can see in the video, irrespective of what the old CEO says, its clear that it wasn’t very much expected to him, whatever happened. Though its also true that its been months, since when we been hearing that Nokia Directors wanna make some big overhauling in their management team.

Question is what emergency came that Nokia made such a big decision when their biggest date of year is about to happen? And what’s going on behind the curtain, when Anssi Vanjoki also resigns just one day before the big date?

Definitely things are out of control inside Nokia and even if we want then we can’t deny it. It seems that there is a fight between business and innovation. Its clear that Nokia not feeling very right about its position in market right now and also ready to do any thing for keeping the profit levels rights which are sinking now days for their low cost handsets.

May be some people at highest post of Nokia are not feeling comfortable with giving out free services like Navigation, when they given more than 8 millions for buying Navteq or may be its Nokia’s hard backing of Symbian and refusal to adopt Android, when whole world seems to moving in that side of world, might be making big argument from inside as well or may be its just slow developments at their side to cope up with the innovations coming up.. from outside, we just could make the guesses from here.

We know that we wont get the exact reasons ever, but we just don’t wanna see this company go on path of Apple or Microsoft to be a money making machine rather than technology leader, which seems to be happening taking the hints from these abrupt changes. My mind just keep on saying that don’t be right!! don’t be right!! We are still with Nokia in the way they are, wanna improve them, but still wanna shout that there is nothing as wrong as changing the whole things.