Finally after a loooong delay, Nokia C5-00 reached to Layman’s take today. I already heard and knew many things about it before even taking it in my own hands, but having it in hands for a while was just another feeling. After all, this was the phone that already had bring many of my non-tech friends in the smart phone genre. 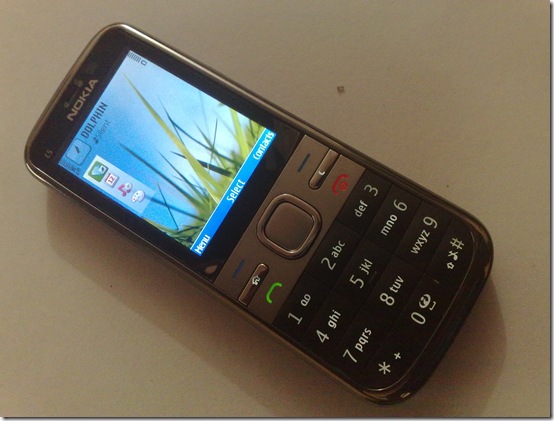 I remember my days of entering into Smartphone genre….. not many years ago and smart phone were something else, something pricy like today’s touch phones are. There was nothing like 3G in India and not even Ovi Maps/ Google Maps were that much famous (or might be my circle was not aware of that much). Criteria of buying a phone was just the call quality and music performance. Then some people like me, who wasn’t wishing to go for an E and wanted mails etc as well, chosen to go with Nokia N70, leaving cheaper N72 and N73 (which might have been a better decision).

Few years gone and everything has changed now. Social integration, A-GPS, IMs. Emails and most importantly 3G has became the new minimum. With a price tag of 7.5k, more than a Smart phone, Nokia C5-00 is a question that why you still wanna be with a dumb phone?

Its not going to be a review of kind provided the short stay of device with me, so for that thing, you could check out posts from AAS here and from CJ here. Its just about few of my impressions about the device.

Who should buy Nokia C5-00? Categories might be many, but I wish to target two kind of people here, who would find C5-00 interesting piece for purchase.

1. If you never had a smart phone ever and wont mind buying something better, if no where costing more.

Why you are thinking about buying a phone in some 5k without some proper brand name and with compromised features, when you can spend 7.5k for everything?

ARM 600 MHz processor (‘Current’ flagship Nokia N97 had 434 MHz processor)
128 MB RAM (Its a Symbian means still 50MB of RAM available on boot)
3G with 10 mbps download and 2mbps upload
S60 V3 FP2 (the same OS, I seen in Nokia N86 and will be coming with Nokia E5-00)
S60 means seamless multi-tasking means running many apps together and switching between them
A-GPS with free life time navigation Ovi Maps 3.04 (You need to update, not out of box)
2 GB MicroSD included in package and 16 GB maximum support for hot swap MicroSD

Tell me, if anywhere else, you are getting all these things with a price tag like this.

2. If you already have a high specs smart phone and looking for a simple yet elegant backup device.

We all love to take part in debates over Smart phones. We fight for the reason, one should love touch phones or non-touch. We argue about what features a phone should has and what should be left, but end of day, at the most minimum, phones are something to make calls, send messages and may be even updating your twitter/ facebook with geo-tags. Tell me, if anything more you wanted if left with no choice.

We all face situations, when our phone goes dismay and needs Service center or might be situations, when for any reason, our ‘high specs’ refuses to work in the way, we wanted it to do, then we run for the phone, we bought for our wife/ dad/ mom or little kid, who didn’t knew that what to want from a phone and put our SIM into that to take a breath. But what minimum even we ‘geeks’ want?

Nokia C5-00 serves you as a 3G modem, not to forget, even if you leave the profits of A-GPS on board.

Some first impressions after taking it in hands 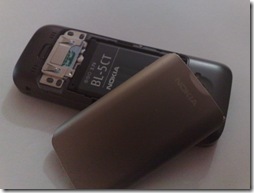 Such a light (just 89.3g) and yet solid device it is. Nokia E52 and Nokia E72 been like minimal standards for me for any of the solid design and even with some plastic on it, this thing completely surprised me. With a metal border surrounding the whole build and then metal plate covering the battery, this all make you feel very safe, Specially when you see it from front, then its just metal apart from keypad.

The size of display is 2.2” here, while I have been with 2.4” most of the time and it was likeable when I was with 2.6” of Nokia N86. The same resolution on a smaller screen sometimes feel a little hard about fine print. The display of Nokia C5-00 seems to have a bit better brightness than the other handsets I might have seen in this range, but when I read tweets in gravity, then it seems a little bit hard over eyes. 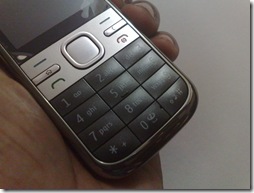 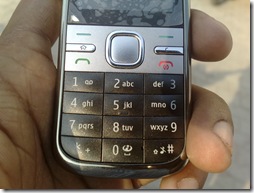 Even if the looks didn’t impresses much, the keypad is such a gem. The tactile feedback and effortless typing is such smooth that I started thinking that why I liked keypad of Nokia E52 more. I bet you can go on typing message on it for hours and still your fingers wont hurt. Wonder what they put inside, sponge?

This thing is a bundle of joy with providing you all levels of connectivity and it can seriously hit the sales of Nokia E52 for people, who don’t care about the smaller screen.

For God sake, this beast has free life time navigation and upto 10 mbps high data speed that even my all time beloved Nokia N82 always dreams about.

May be people saying nasty things about, when it comes to real thing on non-touch Symbian never had an alternative. My Nokia N82 did all whatever I wanted from it and I loved it when I seen Nokia N86 operating system doing better. Nokia C5-00 got the same operating system as was with Nokia N86 and so stands my detailed post about customizations of it.

Home screen with vertical standby and choice of contact bar, its right there, when you talk about latest. I hate you Nokia that why you can’t provide the OS upgrade to older but capable devices like Nokia N82 in the same way Apple or Google doing.

The facebook integration is something like we always wished. A free app that makes your contacts alive. You don’t need to place pics for your contacts anymore and even status messages from facebook will keep on following your contacts. Though what I badly missed here is the fact that it doesn’t seem to bringing anything more like Birthday syncing etc. It would have been a nice addition and I am sure not a very hard thing to do with Facebook APIs.

I also like the fact the way, transition effects are placed here. Not sure, if they were there in Nokia N86, but at least Nokia doing transitions like somewhere.

I tried a short little video in hurry. Sorry it was all blurry ..

When one might been with Nokia N82 for long, then it becomes impossible for any other mobile camera to satisfy you and even more than the Xenon Flash, what I missed badly was autofocus. Macro mode wasn’t even available in Camera settings. Is it with all Full Focus and even EDof cameras? Dammn!! I am throwing Nokia E7 likes of 8MP camera in dust bin.

Well!! I wont say that the camera was crap, it works enough well, when you talk about things placed after a feet (25 cm to be precise). It got even the panorama mode that isn’t here with Nokia N82 though there is shortcomings in panorama version of Nokia C5-00 due to absence of accelerometer, but still its right there and it works.

Well!! let me admit it, even if we crave and crib for non-Xenon Flash all the time, on the another side, we love the video light facility that only LED flash facilitate.

What annoyed me about Nokia C5?

Memory I really think that one should make 128 MB internal memory as a minimum now. Your Windows XP with its updates takes not more than 7Gb’s, but will you like if your vendor provides a C: drive with 7.5Gb?

50 Mb seems so low specially considering the fact that the installation of Ovi Maps 3.04 takes additional 8 mb from whatever remains from 50mb.

No extra keys At one side, you might like the minimalistic design, but no camera key somewhat diminishes some chances neither does it has a gallery key. I felt big troubles while trying to set up a shortcut key for Best Screen snap.

SIM Slot Its exactly not annoyance, but its like missing something after coming so close. Check the below pics 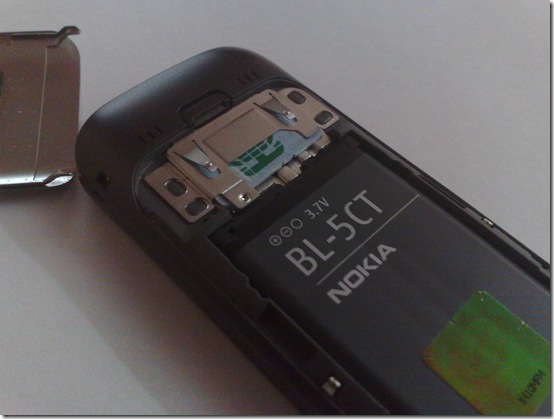 When you see the SIM location above the battery, then at the first sight you get excited that you can change the SIM without taking the battery out, but its not … you just can’t. May be the reason that Nokia knew if they would have provided this then people will ask for hot swappable SIM. Isn’t it?

Nokia Messaging with NO default HTML view yet again Its getting out of every logic now and really demand a proper explanation from Nokia and their developers. What are they thinking of themselves that continuously ignoring such a small thing.

Nokia E52, Nokia E72, Nokia C5 and even Nokia E5, why there is no option of default HTML view? Why we need to open up that crap option of opening mail in web? When we can have it in older sets like Nokia N82, then what stopping you from providing it in firmwares for the devices that are dedicated for emails?

So, this was Nokia C5-00 from the eyes of Layman. Anything more you wanna know?