Its been out since a while that Nokia N8 units have reached Nokia Priority Store… err not for sale, but just one fully working piece for demo purposes. So, while many already had their hands on, it was now my time to walk over the ‘nearest’ Nokia Priority Store for touching the device that everyone knows much about before actually seeing that.

Nokia N8 phenomenon really made me think that if I am really a worthy blogger, because when whole of the world seems to be having hands on it and talking about it, then a pin drop silence from Layman’s take? But that’s life. Not even other fellow Indian bloggers got real taste of Nokia N8 in their own hands yet, thanks we make biggest market for Nokia, so we are taken for granted, but anyway … not complaining.

When I reached my nearest Nokia Priority Dealer (no way nearer neither easier to reach), then this time there was a change; An LCD showcasing Nokia N8. While I am trying hard to think, this wasn’t there last time I visited. I guessed that it must be supporting HDMI input as well to show case HDMI output from Nokia N8, but even if it would have then the location of LCD was odd, so I wasn’t able to try that out. 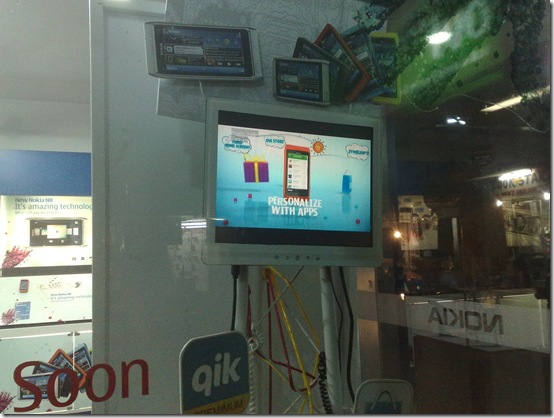 Though I was much late by time (reached by 2030 Hrs) and the nearest NPD to me isn’t that big kind of shop, so obviously I felt a lack of mannerism, which might push the Nokia N8 sales more stronger. But still it was exciting to see that while I was there for only 15 mins, I seen three Nokia N8 pre-orders.

This is first time, when we see common people coming up over Nokia Priority Stores in India and asking for pre-order. Even if it seems being endlessly late for Nokia N8 shipments, it was nice to see Nokia N8 units reaching for Demo at least. Moreover, this time, Nokia seems to have well communicated the features over their NPD staff members or it might be web on buzz that might have educated them a little.

There is much buzz around the web that what Nokia N8 got in sleeves, so it make no sense repeating that again and again. Just want to rant out what I felt.

There are some things in the world that can make anyone go even shameless, like asking your favorite girl for out .. asking for a Nokia N8 hands on was kind of that as Indian NPDs haven’t been that generous always, but it was Nokia N8 man.. who wouldn’t have pushed their lucks? 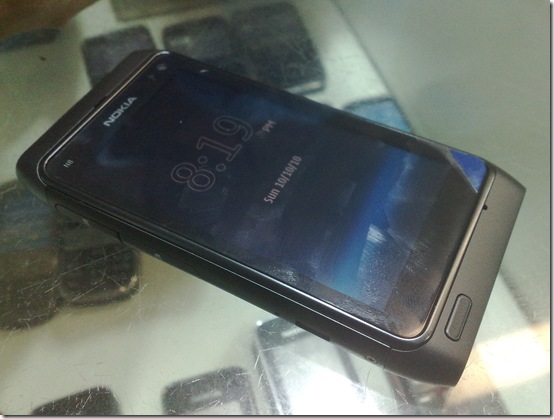 Not at its cleanest (you can spot finger spots over screen), but finally Nokia N8 unit was in my hands with a NPD guy standing on my back, trying to explain the features of it, while in your mind, you wanted to say that shut the f*** off!! whole world knows about Nokia N8 right now.. let me enjoy the moment, we been waiting from months.

I just had a chat with some of my twitter friends over the color and though such choice of lovely colors always confuse you, in one sight, I was again sure that Black (official Dark Gray) has to be my color.

Nokia N8 was such a looker

I knew it already, but having a real unit in hands was another experience than having your hands on some dummy. No second thought that Nokia has never made such a solid shaped device ever in past. Even if we would have admired Nokia E71/ E72 or E52’s compactness, the beauty was one of the biggest factor that made Apple iPhone a huge hit once and with Nokia N8, finally Nokia is back in the game.

In your hands, whole Nokia N8 seems like a single piece of metal except the volume buttons, even bulge of camera in back, seems in sync with whole design language of Nokia N8.

Though finger spots on Camera bothered me a little as that would be a thing that we will be living with soon. We understand that there was huge pressure over Nokia to keep the design as slim as possible and so there was no liberty of using a camera cover, but hoping that the glass is something real solid and scratch proof.

While taking the pics, I placed Nokia N8 by back once and was immediately pointed out by NPD guy not to do that.. but hey… I suppose there is a scratch proof AMOED screen here in Nokia N8, isn’t it?

No doubt about the fact as I got not a single scratch on the unit there though it obviously seems to have seen many hands in last few days.

Anyway, I didn’t had the time and chance to take many snaps of the device, but saving that part for the time, when the unit actually come to me.

Well!! mixed feelings, I have to say. If I start with where I was with Nokia 5800, Nokia N97 Mini or even Nokia N900, then the touch response on Nokia N8 is like never before. Absolutely no lag in anything, in nothing. Three desktops, new coverflow in music and pinch to zoom in Gallery is what you going to notice first, while the NPD guys will push you look into Camera part first.

Best thing to see, there was absolutely no lag in showing thumbnails, no matter how many pics are there, neither it was taking any moment in getting focus locked. Nokia seems to be specially worked up the camera and gallery part. Pinch to zoom was perfect, though I was pushing it to limits that how much zoom, it could get and I found that there are limits.

Well!! although I have checked RAW image from the hack and the one, which Nokia N8 actually produces and I could easily conclude that there is no harm keeping the compressed ones, but sure the continuous Auto-Focus while video recording is something that will pressurize Nokia very hard in next days to be accommodated in next firmware update. I did a few samples and while they were beating my 12 MP Sony camera by big margins, still after seeing the samples from the hack, I know that it could get better after continuous auto focus.

If you ask me, then sure the first look says you that the UI is dated now and it kind of horrible insisting from Nokia side to keep on with the same icon set etc. At least should get rid of two button approaches (options, exit) in each of app, haven’t they learned anything from Gravity or why not they would have improved Gallery UI like Android one or even their Image Exchange one? They seems to be taking the first lesson by taking minimalistic approach in Hardware design, but they still have to learn the same in Software UI.

But at the another side, I understand their issues as well. For changing the UI, you need to change the APIs as well, which they are sure doing but making the whole OS go efficiently QT based and asking the developers bring the same feel in all their apps is something that sure takes time. Hope they will manage to bring MeeGo and Symbian^4 in time.

First disappointment, which already being circulated over air is no qwerty is Portrait mode. That will not bother much to people, who are on touch screen from long, but for the people recently converted from Non-touch to touch, it might be a big deal. Well!!! I am stressing more on typing experience due to the fact that I am coming from an essentially non-touch background. So, the second thing to mention was absence of swype. If they have got it in their beta labs, then they could have shipped it easily.

Second disappointment with the demo device I got was, almost no apps installed except youtube etc. No gravity or JoikuSpot lite as much I remember, contrary to what I heard or expected. It was really out of logic that why they couldn’t manage contract with at least one Game Developer to put at least trial versions of their some games.

In absence of WiFi in the Nokia Priority Dealer, I visited, I was not able to check out the social integrations in maps and contacts in some real details, but that would be what I will be looking to see, once I get the thing in my hands. But sure, NPDs aren’t giving their best in demoing Nokia N8. They should have managed WiFi, HDMI, USB OTG demo etc.

So, that was my little … and due to my visit to home, before it could get published, Nokia N8 has already been launched in India and many even got hands on it. Let’s see when my turn will come, but I am trying to hold my temptation so that I couldn’t end up paying 2-3k higher.