Reading the buzz on web makes you feel that there is no excitement in being with Nokia now, except the ever long wait for PR1.1, 2.0, 3.0 etc and then saying that its not “that”, but when you look back to real world, then you see something totally different … people still ask you that “which one to buy, E5 or E72?”, “How good is E7?”, “Are C3/C5 best VFM out there?” … you still feel eyes over you when you flaunt your Nokia N8 …. you visit a mobile store and see that dozens of people still buying Nokia … and you ask yourself is the platform really dead?

After Gravity from @Janole, this time the well known pixelpipe team decided to give a treat to Symbian by launching their Google Apps application (In beta as of now). 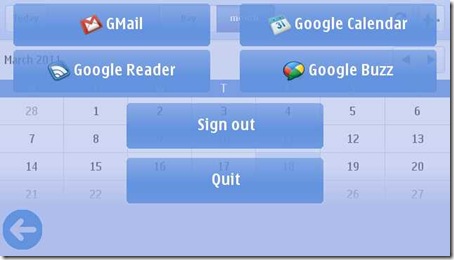 Its a much different app from what we known @pixelpipe people for and while in first glance, it looked like similar creation as was of our friend @asrialbaker, but when I digged deeper then I found things really a step up here.

You just need to give your Google credentials once and it presents you four of the top Google services in a beautifully effective manner for you.

Today they have released another version of the same app while the first beta was send to a few of us by last night itself, so I will start from the latest version only (The latest is about to release on Ovi Store soon, the third revision).

Installation: Installation part of the same app is pretty straight forward and as its not a Qt 4.7.1 kind of app, but just Qt Webkit one, so you don’t even run into issues like installing beta Qt versions or running into troubles like currently Bubblelock is facing. Just install a few kbs and you are ready to roll with a so fluid interface.

Priority Inbox, Starred, Buzz …. all the goodies we know about Gmail are here. Small icons of refresh, search and compose just fit perfectly and there are always a bottom bar for back/ forward buttons, +/- for zoom-in, Zoom-out (no pinch to zoom yet or text reflow yet) and maemo like Menu icon for bringing up the service switcher. Mails will be shown in thei text rich form with pictures and colored fonts as well and right top of the screen will carry related options as well.

The above two screens are for the compose section (I must say I am only missing a split qwerty here otherwise it was big, hope PR2.0), a plain interface with even auto filling of addresses. Though there is no haptics involved in the interface, moreove its still not a HTML rich editor,  so you will be able to send text mails only, but for 90% of people, it should be enough. But still I think team @pixelpipe will add attachment option at least.

Another neat interface here for Gmail Calendar section. Same light blue theme as rest of the app and homogeneous bottom bar in all the sections. 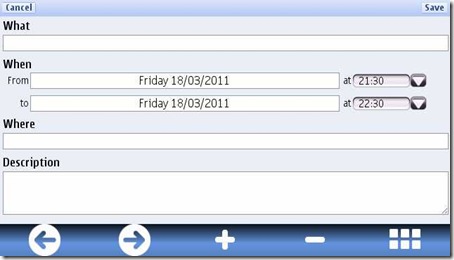 Not only you can view your calendar but can manage and add new events with rich options like the above ones. 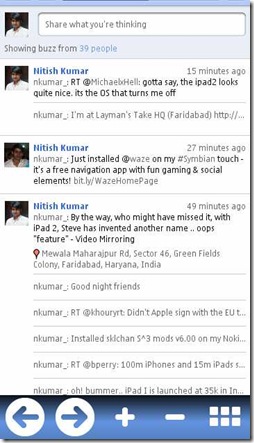 I guess this will mark the first proper app on Symbian for bring Google Buzz on phones in such simple way otherwise there was only one official way and that was via Google Maps. I still wonder that why Google wished to keep their Google Buzz service under wraps than letting it evolve like twitter by giving developers easy means to develop apps or it.

As you can see, the simple interface still provides most of the option and even sending geo-tagged buzz (public/private) is possible, though I didn’t got the same working yet. Like rest of the app, though you can’t play Youtube but you will be able to see the preview image of the same. 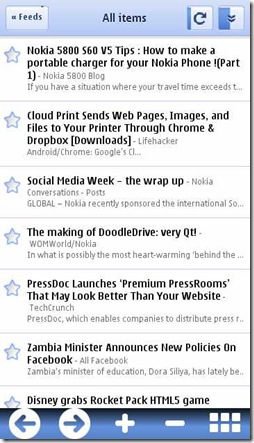 This is something that many of we blogger want to see, the Google reader at its simplest. Though there is a Nokia Reader but that one doesn’t support Google Reader service and NewsFlow app brings the things in black that might not be suit to some of us. 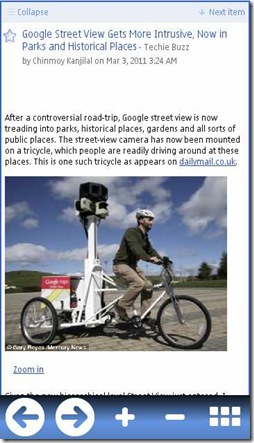 The Google Reader section of this app bringing the feeds almost same way like it shows in Google Reader on desktop. Rich text with link and pictures and fluid interface with all way kinetic scroll, feels like just what you wanted from your Google Reader app.

I only wish if this all of working offline as well.

The idea and tech behind this new app

Pixelpipe team started off this project for simply achieving a better level of familiarity to Qt development, but the simple idea then later on evolved into a dedicated QtWebKit application that’s optimized for accessing multiple Google apps. It was initially built this for internal purposes however after the response from inside people, the Pixelpipe Team decided to give Symbian a deserving treat.

If you use Google apps for mail, calendar, feeds…, and if you’ve been accessing these services through the default Symbian browser you may have been disappointed with the experience. The pixelpipe  team thought the user experience should be at least as good as Android & iPhone provide so created this utility to enhance the experience on Qt enabled handsets.

While the application works pretty well there are some issues with performance when switching between services. We’re hoping some of our testers might have some incites into improving performance & functionality.

As its a beta app, its not available as public release yet but it could be obtained by writing to pixelpipe team on nokia@pixelpipe.com. Any feed back about the app might be submitted to team in given below format

So, do I need to say that you wanna try this?