Nokia Facebook page was a hot topic among Nokia Fans and bloggers since some days due to a mysterious message on their page with a countdown heading towards today. It didn’t stayed long enough as a mystery among Nokia fans due to some goof-ups (?) from Nokia side itself, when they accidently leaked the name "Belle".

Even though I am rarely blogging nowadays due to office things, but like always I been active on twitter @nkumar_ and like others I was also wondering about the message "This time it’s personal" and even sent a "funny" tweet as well. Though I am yet to figure about the exact motives behind the tagline, Google sent me to this link that was written by Chief Scientist, Accenture long back in 2009. Not sure, but was it first sign of Accenture’s involvement in Symbian?

Anyway, the news is bigger than these small speculations… it is about Announcement of three super cheap smartphones equipped with well awaited Symbian Belle (Yes! you are reading it right.. Symbian Belle, I know even Symbian Anna roll out not finished yet). So let’s talk about the new joinees first.

On August 24, 2011, Nokia has announced three new mid-range smart phones and one headset. All of them have their own firsts. Let’s discuss about each in short.

People living in Asian regions might have noticed that the fight at low price segment have became fierce recently. Many of the people, who might have been non-smartphone users till now looking for cheapest options possible to taste the whole new world out there. But still when it comes to suggesting friends that what is best for them at price around 10k-12k, it never been an easier choice. Earlier I been suggesting people for Nokia c5/E5 and for those who want touch only, there was no options but Nokia 5230 like phones

Nokia just made the choice easier with a phone official touted as loudest smartphone till date. I definitely would like to check this out someday as I know a few for whom the loudness been the most important criterion always even if the voice quality goes to trash box. Thank God, it’s a Nokia, so I wont even doubt on Voice Quality this time.

When it comes to look and specs, then one would not call Nokia 600 a super impressive one, but once you bind it with the price segment and other devices available in similar price point, then sure you find a lot of reasons to smile.

1 GHz ARM 11 (Single CPU) Processor, 512 MB RAM, 340 MB internal memory, 1GB ROM, 3.2" Capacitive TFT screen …. sometimes one feels like he is reading specs of some 20k+ phone. And for those, who just wanna to skip a Nokia for Symbian, its just beyond anything Symbian you seen till date, its Symbian Belle.

Here I want to read some fine prints about the hardware and clear some doubts here about the phone  ..

So in all, you got a phone that is loud, light as less 100g, launched at 12k around, got all the frequencies to run across the globe, got the WLAN caliber, got Bluetooth 3.0, got NFC and innovative ways to make use of it, has the caliber to run your 3D games, can shoot 720p video and blessed with an interface that even premium users like Nokia N8/E7/C7/X7 users still dreaming for. Anything you missed for 12k worth?

I am still wondering that why we are still stuck with hardware Call\Call End key and specially the Menu button? It was supposed to end with Symbian Belle.

I was surprised when Nokia was calling Nokia 700 as smallest smartphone in the world. Its definitely not the smallest, if we are talking about all smartphones and we seen Nokia C5 likes already, but as the official blog post explains its the most compact touch monoblock smartphone in the market right now, because other might have managed slim profile at 3.5"/4", but no one managed such a slimmer handset at 3.2".

The Nokia 700 measures just 110 x 50.7 x 9.7mm and weighs only 96g (lightest of the three handsets announced). Nokia 700 might have been regarded to have the most superior display among the three launched devices. A clear Black AMOLED 3.2" capacitive display, which would be a big assurance of day light visibility and durability over time. Gorilla Glass perfectly matches the slim profile of the handset as it can slip into your pocket easily without even caring for scratches etc.

While most of the features of Nokia 700 go similar to Nokia 600, but apart from looks, there are some fine print changes as well.

If you ask me, then while the slim profile sure gonna make this phone look very attractive, but at a price of 17k around, the absence of front camera and a proper battery life will be deal breaker to many. I can understand that both the things are design compromises for making the smallest Smartphone+Touchphone ever, but not sure if many would like to miss front camera at this price.

The looks definitely gonna remind you of some handsets you seen recently.. Nokia C7, Nokia C7-01 and Nokia Oro, but the same form factor and looks got a new frame, Symbian Belle this time.

While Nokia 701 should be called as most premium device equipped with Symbian Belle as of now. At first, I found it strange that Nokia skipped to provide it the glorious AMOLED screen even if CBD and Gorilla Glass still here, but later came to know that the device uses the same IPS display panel as Apple devices nowadays (though resolution would be the same 640 x 360 px). Nokia even calling it as brightest screen in the world in terms of Luminance.

While the features are definitely upgraded over others in this around 19k priced device,  let’s go through the fine print of the hardware.

So, you can see that apart from the Full Focus Camera, there seems to be less compromises made with Nokia 701. This handset sure seems to unsettle the sales of Nokia C7 likes. Thing is when it gonna come.

For those looking for the official specs sheet and comparison, should check it out here or if you feel lazy, then screenshots here .. 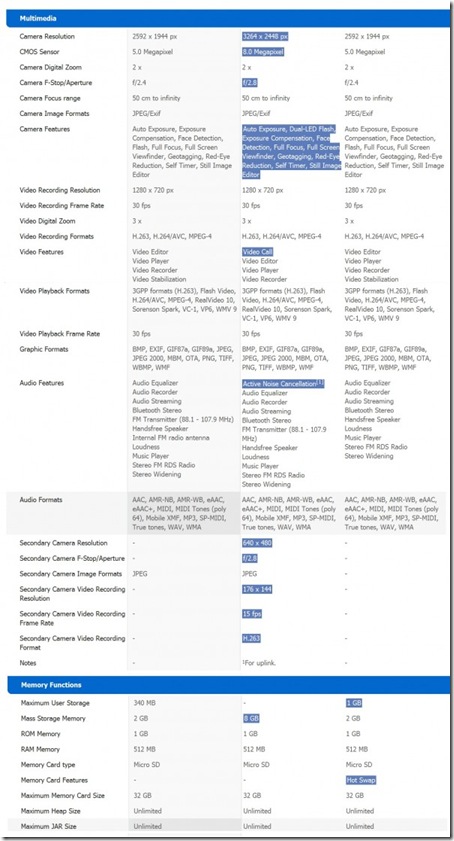 After using Nokia BH905/BH905i, while I was stunned by the quality output they provide, at the same time, I was always left disappointed by the huge size of them. I mean even if I can afford the alien look after wearing those big ones, it wasn’t that affordable to carry them around. Look like Nokia finally managed to bring the tech into practical sizes now.

Nokia Essence really makes a big claim that is 99% noise cancellation and coming from the makers of Nokia BH905/905i, you have no reasons to doubt on the same. Unlike the usual Bluetooth headsets, you get a controller here for farward/reverse/play/pause and ear buds like wired headset brings you the goodness of both the worlds.

The launch price at 8.5k is sure not a cheap one but such quality headsets are always aimed to a premium audience, which knows that how much value a peaceful music has.

Nokia officially announced Symbian Anna back in April, while it got delivered in mid/end of August and before August could have ended, we got a fully changed and polished update called Symbian Belle. Definitely it seems so exciting on paper and no doubt Symbian Belle is exciting, but hearing the words that its coming to existing devices by some Q4 seems to be same frustrated wait game.

In no way, I was expecting today’s event to bring Symbian Belle for my Nokia N8, but this time I was hoping them to keep the gap even more closer like just a month. But anyway.. when you take a look over Symbian Belle then you will find that this negative preface is just because Symbian Belle is just too good. Its something which if would have arrived in last year, then the market story might (?) have something else.

First let’s watch yourself that why we say that Belle is not the Symbian we knew till date.

While I am sure that you will find yourself stunned by the visual experience here, let’s summarize that what’s new about Symbian Belle

It feels like Maemo days back to Nokia. Not only shapes but there is one more thing to notice about the widgets that they seems to remember their positions for Landscape mode and portrait mode separately.

It seems that like Apple, even Nokia ran out of new ideas about dealing with notifications. But on the other side, as far as a user is concerned, I am happy about it as Android had one of the best way of notifications (though were more of an aid due to limited multi-tasking) and sure such styled notifications with full multi-tasking supported Symbian gonna do wonder.

A back button and options button along with context sensitive search button at the bottom is sure not exactly what I guessed in one of my post before, but sure seems to be solving much of legacy annoyances.

Done with reading? Watch one more video about it.

So, this was all what Nokia announced today and one more announcement was of more importance, where they official said that Symbian Belle will NOT be the last Symbian Update and many more will follow. What do you think about it? Can we start recommending Symbian again? Do tell me, I am all ears on @nkumar_ or nitish@nitishkumar.net