Nokia N9: The Beauty with the brain, the Meego walkthrough

While the Nokia N9 seems to have smitten you by its look alone, this is not even half the thing that this engineering magic marvel holds for you. A new language of interaction, a new definition of beauty, an entirely new UI that stands out of the crowd. Yes! we are talking about the first All Touch OS that doesn’t want buttons to live any more. Isn’t this a little strange that the same Nokia, who was first a bit hesitating about Touch screens when iPhone got launched and now it comes back an OS that is entirely based on touch alone..

Thing is, why you need buttons, when the Menu is just one swipe away and task manager, yeah that too takes just a swipe to side. Oh! wait, volumes, yeah! you can always increase or decrease volume by taping on top area, system volume, ringing volume is just a tap away.

The similar all Touch UI concept later got taken by Android ICS as well and others expected to fall in line sooner or later, but isn’t all this a little scary. I mean an all touch screen phone, what would you do if it hangs, what if you get trapped into some dead lock where any of the online app (full screen) not responding and you can not go anywhere else? Think about it… the All Touch UI experience can badly go wrong, if.. if wrongly implemented.

But let me tell you all, this should be praised with full throats that despite of all fears and the fact that one can hang any gadget of the world if want to do so, but it never happened with me that Nokia N9 stuck on me in some deadlock and it is no lucky charm, but this is how polished work MeeGo on Nokia N9 is. 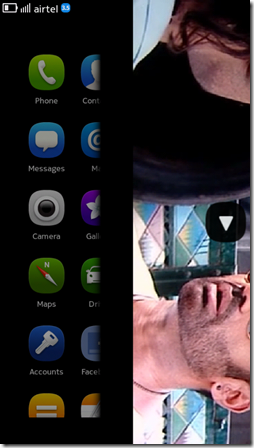 All those people who blamed Nokia naïve about the animations, should really really check it out. In the above screenshot, I am swiping a running video to bring the app grid up. Interestingly the video will keep on running till you swipe it out and once out then it goes to pause. Similar with Camera UI and I demonstrated that in video demo as well.

“This swipe thing is addictive and after using it, I end up swiping on every device.”

I was prepared to say something else, but hey News Flash!!! I have no other words to say.. this thing is really addictive. The magic spell is already on me that’s why I am feeling utterly frustrated on my SGS, when swiping down doesn’t closes an app or if I needed to push some physical button to switch to another app. Why one should look at the device then find some button or some menu then sub menu to close an app? Why why why? You just can’t find any better words but “very Intuitive” and “ADDICTIVE”.

Answer is… NO ONE.. we all are here with touch phones so that we can running away from those buttons, those taps and those tedious navigations, making the buttons minimum alone wont do the deal.. it’s a continuous evolution and swipe the next ladder, admit it.

Let’s start with a rough walkthrough video demo of Nokia N9 …Though making a video of something as beautiful as Nokia N9 should be classified as a job for professional hands only, but this was all what I tried.

You can see the difference from even the moment, you take the device in hands and then switch it on. Notice that how Black remains black even when device switches on, that is the beauty of Clear Black Screen. Then the glorious animations ending with a progress animation in shape of Anna like icon. This all feels like some fresh air.

Once the animations are over, then you land up on a screen full of shiny and colorful icons. “Its so iPhone-ish”, you will say, even I said so. No folder support, no conventional Symbian\Maemo\Android\BB OS like home screen or even widget concept.

It wasn’t my Maemo that I fell in love with from the first sight on Nokia N900, I should have felt disappointed a bit but it wasn’t the case, thanks to the vibrant colored Anna shape icons on the board and the clear black background making the impression so bold.