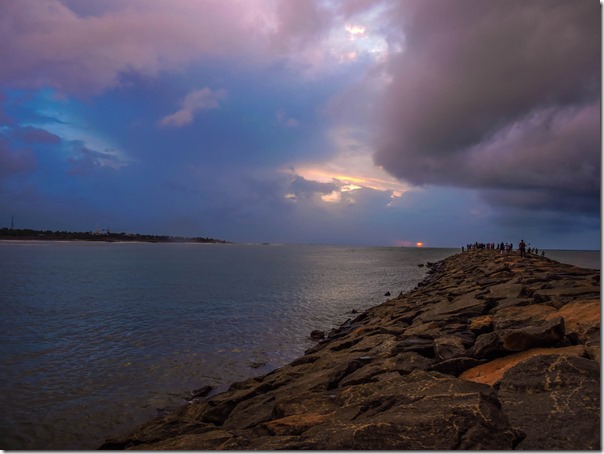 What better feeling than to watch the sunrise at the last end of your country with 360 degree of sea view around and that too under a cloudy and less warm weather. Would admit we wouldn’t have preferred cloudy but a clear sky but every weather has its own texture and should be taken as such.

Morning started with mild showers and we had to take umbrellas from the hotel. The excitement to walk towards the end of the country boundary was just something else. 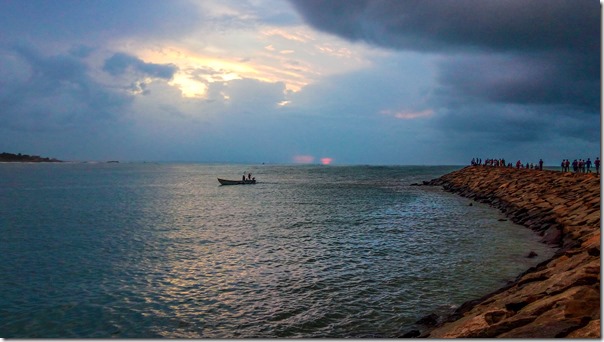 Changing colors with each passing minute, the place is worth spending the entire day just sitting on that stone bridge. 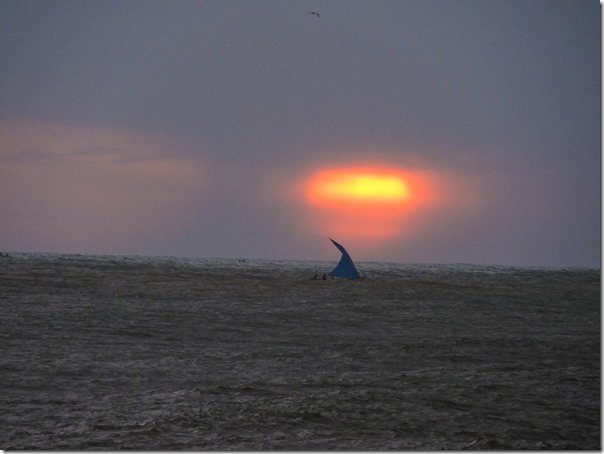 The view, the showers, people trying to sell sea shells and even tea vendors doing ferry on that small but not that crowded place, if it wasn’t about rains and specially kids, then we would have stayed much more longer there but then guarding kids on that place where both side it was heavy waves, our mind was asking us to move from there. 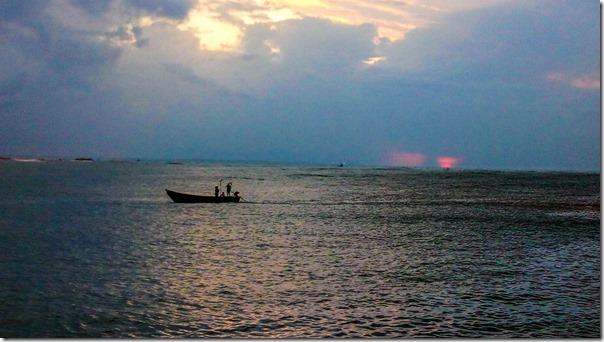 Sipping tea on rocks, when you are surrounded by sea in a pleasant weather with mild showers, trust me, its even more satisfying than what it feels like.

Next was to take a ferry to Vivekananda Memorial, which must be crowded in other season but luckily was manageable this time. Not that there was any single seat empty in the ferry but the queues were not that time taking as I can assume those must be in other times.

The Rock memorial stands on one of two rocks located about 500 meters east off mainland of Vavathurai, India’s southernmost tip. It was built in 1970 in honour of Swami Vivekananda who is said to have attained enlightenment on the rock. The design of the mandapa incorporates different styles of temple architecture from all over India. It houses a statue of Vivekananda, made by renowned sculptor Shri N L Sonavadekar of Sir J. J. School of Arts, Bombay. The rocks are surrounded by the Laccadive Sea. The memorial consists of two main structures, the Vivekananda Mandapam and the Shripada Mandapam. 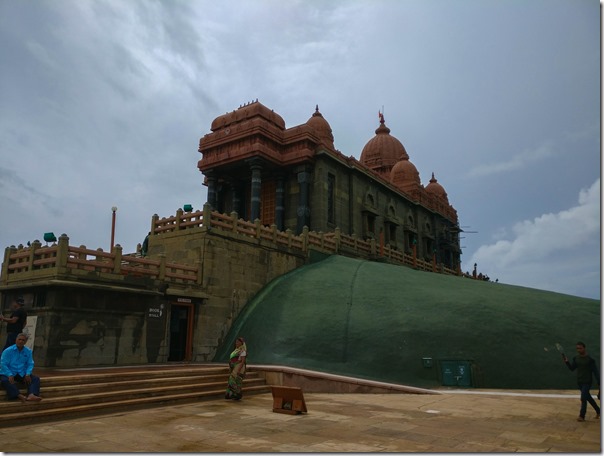 In January 1962, on the occasion of Swami Vivekananda’s birth centenary, a group of people formed the Kanyakumari Committee whose objective was to put up a memorial on the rock and a pedestrian bridge leading to the rock. Almost simultaneously, the Ramakrishna Mission in Madras planned about this memorial. However, this news was not taken in good taste by a sizable population of the local Catholic fishermen. They put up a big Cross on the Rock, visible from the shore.

This led to protests by the Hindu population who said the Rock was a place of worship for Hindus. A judicial probe ordered by the Madras (now Tamil Nadu) government stated in unequivocal terms that the rock was Vivekananda Rock, and that the Cross was a trespass. Amid all this acrimony, the Cross was removed secretly in the night. The situation turned volatile and the Rock was declared a prohibited area with armed guards patrolling it. The Government realised that the Rock was turning into an area of dispute with Hindus claiming it to be the Vivekananda Rock and Christians that it was St. Xavier’s Rock. It decreed that although the rock was Vivekananda Rock, there would be no memorial constructed on it. The then Chief Minister of Tamil Nadu, Shri M. Bhaktavatsalam, said that only a tablet declaring that the rock was associated with Swami Vivekananda could be put up, and nothing else. With government permission, the tablet was installed on the Rock on 17 January 1963.

If this monument is there, this is due to one man named Eknath Ranade, who fought on political and social fronts, at Kanyakumari, at Bengal, at Delhi (Shashtri was PM then), on science front to prove that rock is solid to hold structure, logistics to carry stones, power arrangements for the place and at last the finances (bulk of which came from public donations). Despite of all troubles, it was accomplished within 6 years.

The other structure adjacent to this is Thiruvalluvar statue, which was inaugurated by Morarji Desai in 1979, 9 years after Rock memorial was done. The construction finished in 2000. As of now, may be maintenance was going on.

The Thiruvalluvar Statue is a 133 feet (40.6 m) tall stone sculpture of the Tamil poet and philosopher Tiruvalluvar, author of the Thirukkural. It is located atop a small island near the town of Kanyakumari on the southernmost Coromandel Coast, where two seas and an ocean meet; the Bay of Bengal, the Arabian Sea, and the Indian Ocean.

Due to weather it was fun time for kids there and photo time for the elders.

And did I tell you, there were so many crabs on shores of Rock Memorial? 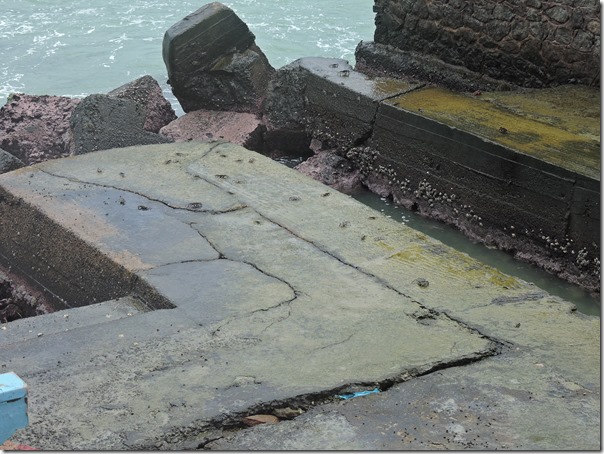 Oh! Did I forgot, we had to get the car battery replaced… so Pankaj and Gaurav headed for that while I was a accompany females of the group to oversee the shopping carnival made by them. Of Course, kids were not far behind.

We got back by 12.20 PM only and then it was time to checkout from hotel and head towards Kovlam Lighthouse beach. Our last sea stop. We must have reached the particular homestay by some 4 PM.

There were options available at the beach itself but this particular homestay was at a walking distance from the beach. It was a small parking space for two vehicles and we had some initial complaints about the room and service, which continued till next day, but still it was manageable. Wi-Fi worked at times, AC worked in night, we got dinner and breakfast served, so we take it as ok. 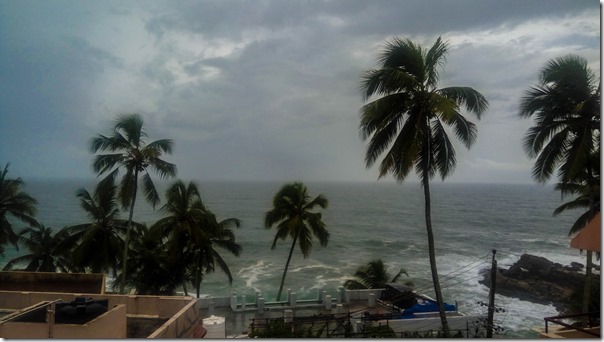 This was the view from the balcony of our room on ground floor. The weather remained like this for most part of our stay but it was still kind on us to allow time at beach without heavy rains. 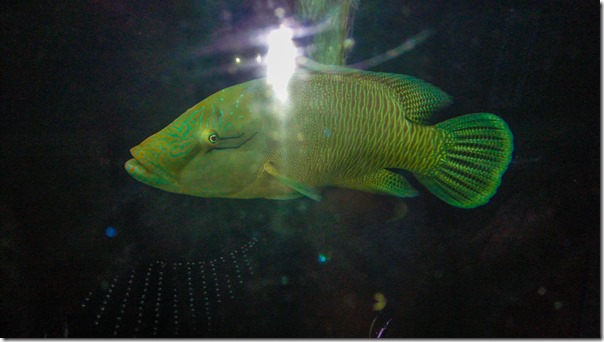 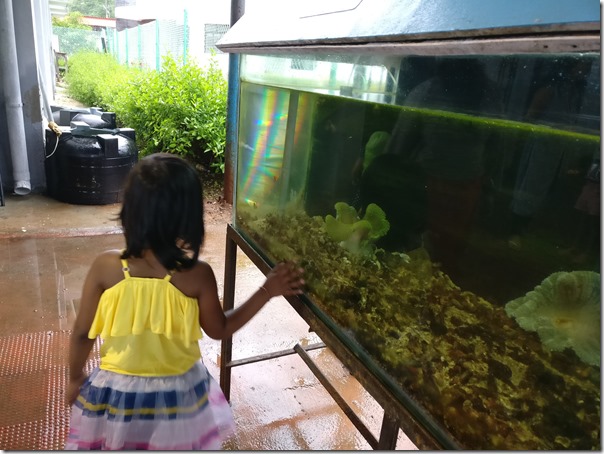 After getting freshen up, we visited the nearby Aquarium, which had a lot of variety including around one and half feet size turtle.

As the Aquarium wasn’t much far from the place we stayed, so rather than stopping at homestay, we headed towards the beach. Of course, car couldn’t reach there and was not allowed to park either so Pankaj and Gaurav had to come back to park the same while we headed towards the Kovlam Lighthouse Beach. 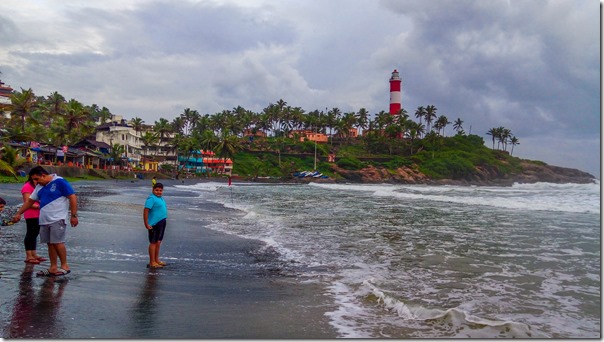 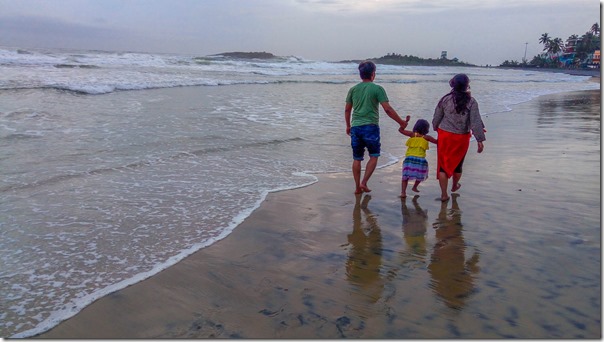 Lots of fun followed before we called it quit by some 6.45 PM, when it was getting darker and tide started rising heavily.

As it was never enough so we came back to beach by night at around 8.30 PM to 9 PM again in separate groups to take a view and walk. Yes! It was risky but temptation was just too much to give it up.

It was an end to a satisfying day with a promise of a lot more on day next.