It was May 4, 2010, when I received trial unit of Nokia E72 from @womworldnokia and then my first request to Womworld was to send it in white, which seems much royal to me then. But I didn’t got a sneak peak of same as it was available in selected regions only. But now the wait is over, just spotted Nokia E72 White edition in New Delhi at Spice Hotspot by today only. 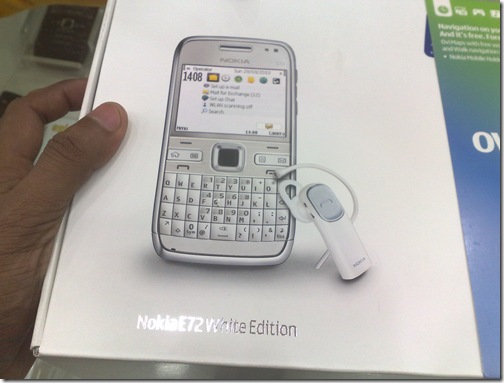 As it was a packed device, I wasn’t able to take more snaps, so taken just one.

As you can see, the package contain Ovi Navigation accessories as my Nokia E52 contained and an exclusive offer of matching white Bluetooth headset BH-216. The price is 1k above than normal Chrome or Black Nokia E72, which stands as Rs. 17, 500/- in place of normal Rs.16, 500/-.

The Hotspot guy told me that stock is limited and could run out anytime. Anyone interested? 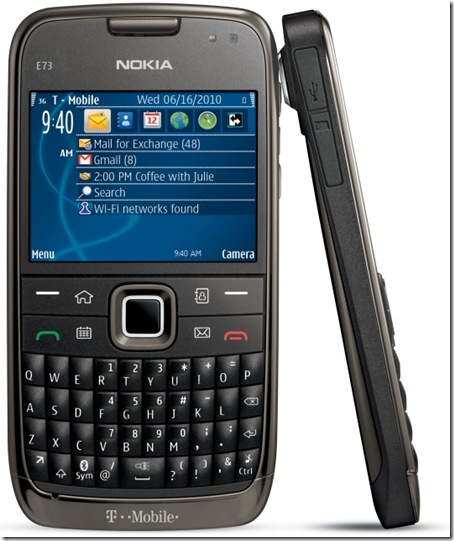 Many are out there desperately waiting for Nokia E5, a cheaper version of Nokia E72 likes, but something arrived before the same and sure has many reasons to bring good news to Nokia Lovers. Nokia E73; though launched within contract of T-Mobile US for regional customers only, but there are many reasons to believe that soon it could hit the worldwide stores as well. Ohhh!!! I have already fallen in love with E-Series devices and here comes more joining the legacy.

Yes!! its expected to be of a lower price band and thanks God, as much info, I got till now, Nokia doesn’t seem to compromise over battery with this one and its coming with the same almighty BP-4L 1500 mAh battery that now days I am not feeling like living with in any of next device (though I’ve been disappointed that all of the next devices are coming with BL-4D 1200 mAh). This ends the fear that Nokia will stop shipping devices with BP-4L batteries at all

Sure, everyone expect the new device to be one bit higher, even notion of E ’73’ tells us that it has few things higher than the earlier one Nokia E72, but what… expect minors only … lets see.

As you can see, there are changes in appearance and as I pointed out with Nokia E52,

More of the differences will come from here and there once the total specs come out and device hit the stores, but it seems to be just a slightly modified version of Nokia E72, either it be hardware or software. Yes!! you will get Digital Compass, Optical Track pad, same 5MP Camera, same Free Navigation, same QuickOffice full version etc…

No words, if this device will ever come to India, but if they get price right (15k or less), then India will welcome the same otherwise, we are happy with Nokia E72 only (just someone please bring white version of Nokia E72 here).

Update: Take a look over the cool ad of Nokia E73 courtesy CJ and NokiaUSA