Update: @janole has released quite a few iterations in this shorter while and going though 6701->6702->6702->6705, Gravity v1.50 Build 6705 is the latest one. The Youtube player now would play in the Gravity browser as well and quite a many minor bugs with the player itself got fix.

What would have been a better way to celebrate the second birthday of Gravity (though the first private beta was released on Feb 19, 2009, but the first official version was launched on March 30, 2009).

Yup! Finally its here, the inbuilt YouTube preview feature I was talking about in the last gravity post of mine and some of the more awesome features like auto-expanding of t.co links (tl.gd was already there in build 6700). 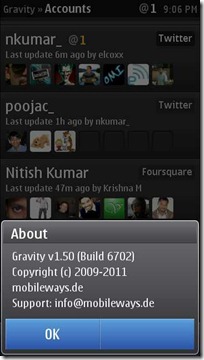 Though the first release for today was 1.50 Build 6701, but @janole released another version as a quick fix for the same that made the Gravity version 1.50 Build 6702 as the official latest version.

1. Inbuilt YouTube\ Vimeo player: What you love about Gravity and @janole is the stretch of imagination coupled with the ease of use and efficiency. When he said he is working on an inbuilt app for YouTube, many of us were excited as his portrait QWERTY almost became a standard for Symbian^3 phones, which even upcoming PR2.0 split QWERTY will struggle to fight with. When he spoke about the Gravity web browser, we all saw how a simple thing changed our way of interacting with  the social web on Symbian.

So, when he says Youtube, we know that it’d be something that’s going to redefine the experience once again and he didn’t miss it this time either, when it comes to the interface.

Sleek, minimal and neat, yet on the performance point…. awesome as Gravity always been. How to use it? As usual, tap the tweet and then tap preview. 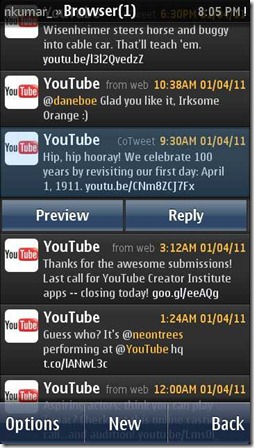 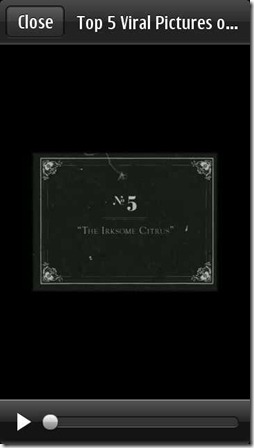 Also you will admire @janole’s attention to details when you see the positioning of video playback in portrait mode too. I really wonder that how many times he does things the best way possible?

Though as of now, YouTube feature is limited to Symbian^3 phones only due to the fact that @janole not happy with crappy 176x resolution of RTSP streaming (current implementation making use of iPhone MP4, 640×360, 480×360), but it might make its ways to S60 very soon. Though Facebook section is still facing difficulty in detecting YouTube/Vimeo links due to improper handling, I’m sure it’ll be fixed soon.

Even if there is some hope, you should not expect much for S60 V3/V5 due to non-availability of standard codecs on lower end models.

Moreover, as you can observe, there are no volume buttons or favorite or sharing options that might have been required in an YouTube player, but its the first step in right direction, not only for @janole, but for the whole Symbian development community. I really wonder that how much you all would have appreciated the work of @janole, if you knew how big work this development is with the native Symbian C++ than just calling some API within. He is really taking whole burden of Symbian on his shoulders (though Pixelpipe guys also have joined in now).

As you can see, its just a start and it’s going to keep getting better.

2. Highlighting of handles, hashtags and links: There were never much of complaints when it comes to the UI, but before we could have asked for, @janole realized the fact that though Gravity detects hashtags and handles easily to convert them in buttons, but highlighting them in text would be a rather innovative way. Other platforms already doing so, so does the web itself.

Notice the orange in dark theme and blue links in white one. Though for some, the orange might look not that impressive (a little strange of a color for SAMOLED), but still changing the color will be a matter of one more update.

Though its only kind of cosmetic update, but honestly for once I got excited if Gravity might have got the auto-completion of names finally. Sigh!! that’s not a simple thing when it comes to Symbian, but that’s definitely in To-DO list of @janole.

3. Auto-expansion of longer tweets and links You might say that what new in it? Gravity got twitlonger support means tl.gd support in the last update already. Yes! Gravity got the same but expanding links wasn’t supported then neither the official twitter service t.co.

Just check the above screenshots and the third tweet in both to understand that how much auto expansion of links coupled with translation feature gonna help you. You can easily spot the bogus links now than  cursing spammers after opening the link.

We have already seen the expansion of tweet, which happens in a matter of 1-2 seconds (depending on connection). Needless to say that how effective that is. After all, its your thoughts that matters, not the number of words that would have been posted.

Note: Still there is no support for typing/ posting longer tweets from Gravity but as I mentioned once from @nkumar_ .. this is something that is already implemented in backend, but UI not written yet, so could make it to public anytime.

4. Much better loading of avatars and support for Transparent ones When I say better loading then its something that can only measured in terms of your own experience means you have to find that how faster the avatar loading has became with the new version. If you ask me then its much much improved.

Though I should admit that it took me a while to recall that what a transparent Avatar is? Once I realized the same, then it was rather uneasy to find a way to demonstrate it for normal people. The easiest way I thought of, was downloading a transparent image and then setting it as Avatar of mine.

So, this was the Avatar, I chosen and below is how it looked like on Gravity screen. 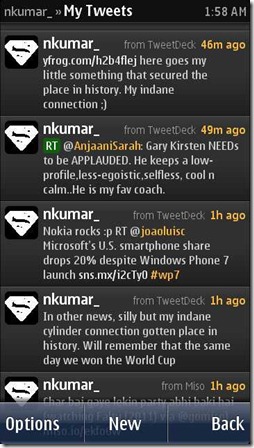 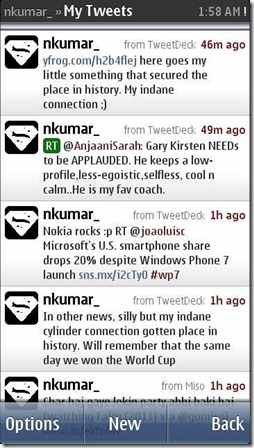 I will say, it didn’t looked some exciting in my demo, but for some people, who love to use transparent avatars, it’s of a real worth addition to Gravity features.

5. Little alteration in display of links Some of you might have noticed that Gravity takes only http://xxxxx.yyy kind of links as links and leaves the rest like xxxxx.yyy or www.xxxx.yyy kind of links. Though still the same nature hasn’t changed much, but what has changed here is exclusion of the “http://” prefix.

Check the links in above screenshot. All of them are without the prefix and also highlighted with a different color than text. Makes it easy for a user to spot the link from text. A little cosmetic change, I would say.

6. Caching/ Pre-fetching for conversation mode Though its more of a backend thing, but one can feel that now its faster loading when you click over some “In-Reply-To” button.

Moreover, though I need to test it but automatic loading of conversation tweets should be an interesting thing.

7. Jumping of timeline when new tweets come in got fixed now.

So, enough talking now.. you all should rush in to download the app from the link and try to find out the other changes that I might have missed till @janole come up with an official change log.

For people new to Gravity (Is there any?), I am sure it will be worth reading The big review of the biggest symbian twitter client and if you want to get connected to me then I am always there on @nkumar_