Amir Khan; The man known as perfectionist, famous for his policy of signing only one film per year only claiming that it helps concentrating on quality, the one man, who really given us hope to achieve Oscar Awards for India, the man, who directorial debut “Tare Zameen Par” still known to be biggest contribution to Indian Cinema in its kind, the man, whose name in credits is kind-of-guarantee for the success. His Lagaan almost made it to Oscars and Ghajini became highest grossing Indian Film of all time. He has worked in only 40 movies (as I know) in span of 36 years (1973-2009), but still known as one of the biggest Indian male actors in front of many actors, who might have done hundreds.

Chetan Bhagat; the man, who really made many of Indians read English novel, who earlier thought that what fun in reading something, if you need to keep a dictionary in side to understand. The Delhi born Ex-IITian, Ex-IIM is known for his unique writing style, which tends to be simple, with linear narratives and vivid storytelling. He has written only four ‘English’ novels (Five Point Someone, One Night @ Call Center, Three Mistakes of my life, Two States), but his each of novel sells like hot cake in this non-English country, which one could compare only with the phenomenon that how Devki Nandan Khatri made millions of people learn Hindi only for reading Chandrakanta and its successor stories.

With my trend of being late into things, here I am back again over issues between Chetan Bhagat and Team 3 Iditots. I was really surprised and even mentioned in my review over the movie that Story writer’s name list should include Chetan Bhagat’s name and “Dont know why not mentioned”, but that time I was not aware that this has already made a big bang across the country and sure it should have been. Legal obligations aside, but for me, on the moral grounds, its insane to write off that Three Idiots only loosely resembles 3-5% with the novel Five Point Someone and so the name of Chetan could not be included and shown in writer’s list. 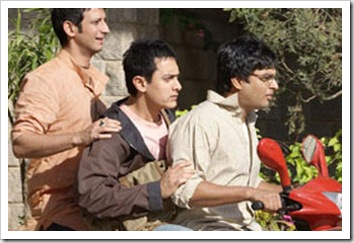 Complexity of legal contracts aside, whom many of us might not even read completely (for example students living outside may check their room rent agreements and all of us could check our employment letters), most of us still feel assured in light of best practices & moral obligations on the other side only and come to learn the things in hard ways only, so is Chetan. Here is the copy of legal contract in pdf.

The controversy started with the release of movie to theaters, which was 25th December 2009 and after the same, messages of congratulations were not only heading to Amir, VVC and Hirani team, but in kind of more numbers to Chetan Bhagat itself. Thousands of emails of stunned fans writing that why not they are able to see the name of Chetan in credits (Its there for a snap of time, but not in stories sections), were bound to made the novel writer to comment upon.

Chetan, who is also a columnist with Dainik Bhaskar & The Times Of India, and writes on political issues, chosen not to comment over the same through these papers or media and as claimed in his blog post, first attempted to contact Team Three Idiots via mail, SMS and Phone, but probably found them more busy in celebrating the success. Obviously helpless Chetan (might have gone through his contract papers and got to know that technically they can up to an extent), who was not having enough to file a case against them, thought to answer their readers himself and dragging Team Three Idiots into court of morality though his blog posts and tweets and the controversy begin.

Vidhu Vinod Chopra and Rajkumar Hirani aside, many of the fans might have not expected Amir to comment in this way against legally almost helpless Chetan  Bhagat. But there were many comments from the actors himself, which sure deepen the pain felt by the Author.

“ He is trying to take away the credit from the film’s writer Abhijat Joshi, which I am very upset about. It is an attempt on his part to try and take the credit away from the person who has actually worked on the script. It’s very unfortunate. There should not be any confusion to anyone that Abhijat is our film’s writer. "

" But in my opinion the credit should be given to Abhijat. For three years, this man has worked on the script. Nobody knows him, but Chetan is a big star. "

" Abhijat has written the script and Raju Hirani worked on it. Raju and Abhijat took the idea from Chetan’s book. The starting point is Five Point Someone, but after that the script has changed entirely. "

“ The only reason it has surfaced after the movie’s release is because Five Point Someone has a few million readers, and when you copy a popular story claiming it as ‘original’ and ‘completely different’, people are going to find out. People did, and so did a lot of media journalists. ”

“ The case is as simple as the makers claiming the story as their own, and clearly it is not. Pre-release, the makers made press statements like the movie is only ‘very loosely’, ‘2%-5% inspired by the book’. After release, those who have read the book and seen the movie (and frankly, I think those are the only people who have the right to comment) find the film to be an adaptation of Five Point Someone. The setting, characters, plotline, dramatic twists and turns, one-liners, theme, message – almost all aspects that make up the story are from FPS. Yes, there are some changes, any adaptation requires that – but it is no way an original story. Leading movie critics have privately admitted to me that the film is 70% the book. Still, don’t take my word for it – go read the book, watch the film. ”

Although Amir Khan and Chetan Bhagat both stopped themselves on writing/ speaking anymore over the controversy, but this controversy still shows the true face of Indian Cinema and reflects that why we are still struggles to get a mere Oscar for any category in years. There are numerous examples of lifted stories from all over the world, which made into top box office hits (likes of Ghajini, Murder etc) and sure one should not get surprised, if VVC shouts over Journalist on calling movie 70% based on Five point someone, after all they paid 11 lacs to Chetan for the story (even if they don’t understand that right to adopt is another thing and right to story is another) at least as Indian Directors really think in this way.

Now, coming to points for which I thought to write my blog post- FPS Vs 3 Idiots

This is not the end of list for similarities and sure there are many many differences (as one I pointed out that Chetan titled his novel as what not to do in IIT, while Hirani made it to say that how to), but still its not that hard to decide whether the similarity is 3-5% or 70% and who should be given the credits for storyline.
I really recommends you all to buy and read the book (it should be only Rs. 75/- or little more than that), so that could really come to know how life in IIT is and how original work FPS was, why Chetan and his readers feel hurted …. rather than thinking that this controversy is another means of getting publicity for already well known Author or the novel Five Point Someone.

14 thoughts on “Chetan Bhagat Vs Amir, VVC and Hirani – FPS Vs 3 Idiots”