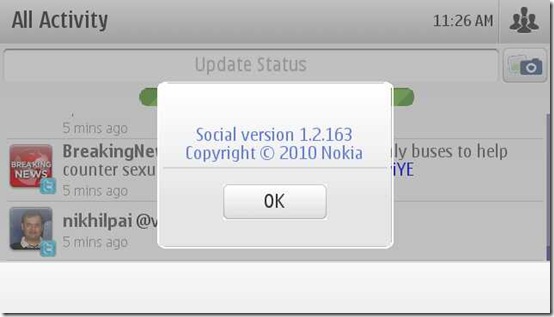 Finally some updates arrive to Nokia Social- The social application on Symbian^3 got updated to version 1.2.163. Which seems to be the second update to the same application of size around 2.38 mb. Seems to pushed by last night 2AM Indian time, Its already been reported to appear on Nokia N8-00, Nokia C7-00 and Nokia C6-01, so we could assume that the update is for all Symbian^3 devices.

Well out of many things that people might be wishing from the social app, what most i am wishing is, manual settings for the connections, in the way, those are in Gravity, A darker theme, common options like Reply to All, Re-tweet, geo-tagging available right there in app and list goes long. Let’s see, when will Nokia reach there. Till then we all are calling it a very very minor update.

For people, who missed to get it in to their OTA updates via Menu–> Application –> SW Update, could download the sisx file from here http://nmota.messaging.nokia.com/clients/Social_1_2_update.sisx

My last weekend with Nokia N86 and sure this comes the time, when I should write about the specific thing for what I asked for a trial of Nokia N86. The Camera … I am not saying the 8MP camera only as most of the called it … its much more than just the megapixels. We will see in next why …

What a Bad Ass Nokia N86 camera is?

The Lens: Everyone talk about Megapixels and says that what if your N82 has 5 MP, mine has higher, what’s the difference? Dude! Its just not about Mega Pixels. But lets start from that ..

Mega Pixels 8 MP means 8 millions of pixels in one particular pics that makes the resolution of 3264×2448 (=79,90,272), but beyond that there is Carl Zeiss; the most renowned name among the lens manufacturers and the Tessar Lens.

What these numbers mean? Its about aperture, the opening that allows the light to pass in. Larger aperture means better performance for low light conditions and lower means better in illuminated environment. It actually says that Nokia N86 has a variable aperture, while Nokia N82 has only one setting F2.8, Nokia N86 boosts on three options F2.4, F3.2 and F4.8 as their specification page says.

Not only me, but many other people trying to find that where are the settings to control the aperture manually, but it seems that they decided to keep it automatically controlled only (after all they were making phones not DSLR).

Wide angle Do you know that Nokia N86 was the first phone ever to offer a 28mm wide angle lens? As the GSMArena link says, it offers your around 20% more larger view angle means you could expect much better landscape and scenery shots now. Wide angle lens get lower focal lengths that reflects in numbers (4.8mm which was 5.6mm in Nokia N82).

Shutter speed When you talk about taking instant pics and get irritated of blurs then you must be actually talking about the term shutter speed. Not exactly sure that how much it was in Nokia N82, but Nokia N86 sure has a high shutter speed that could go max up to 1/1000 secs, sure you can’t drop your eyelids faster than this 😉

Camera Cover Nokia N86 got Slide Lens Cover for Protection & Camera Activation and the difference in mechanism could be spotted in the above pics. Sure its way smoother than we seen in Nokia N82. Good news.

Dual LED Flash Technically they call it Third generation of Dual LED Flash and even if many might be pissed off over Nokia for dumping Xenon over LED flash, it had its part of sense. LED is more favorable for phones due to lower power consumptions and size and for the consumer side, the profit is video light. Let me show you two videos: one with Video Light and one without video light.

I am sure you could spot the difference.

But adding to the conversation of Xenon Vs LED, I would also like to show you the difference of color re-production with a LED Flash and a Xenon Flash.. or may be its feature check out

And as AAS pointed out, Xenon also do well about freezing the objects at the moment better than LED. Check out their post for sure, though my results are opposite about illumination where N86 is better and natural.

Though I am still trying to find the way to use LED as a torch without any software, just from some hotkey like it was in Nokia E72. Anyone got anything?

Dedicated Camera Key Yes!! with Nokia N86, we got the camera keys again. After using Nokia E72, I really felt that how important it is to have a dedicated camera key and that should be well built too. After years of using Nokia N82, I really found the metallic camera keys of Nokia N86 a superb and solid upgrade over Nokia N82.

Well! Living with similar software world for years spoils you this much that in first sight every symbian looks same to you and you think that things not moving. May be even I might have thought so, when first seen the interfaces, looked similar, familiar.. but it was to take a few days, when it started revealing that how much improved things have became with special focus over Camera improvements.. and its about each and everything.

Speedy processor makes processing of photos after shooting them like instant. Panorama mode was never like this much smooth. Everything feels like the way it should be even if symbian interfaces feel older than we might have seen in Maemo or other OS’s, but they work and they work superb.

Unfortunately, I lost the part of post, I was writing over software aspects… writing it again ..

Starting from the settings, there are the usual options available…

Even more details about the quality ..

After that we get around ten options, when we customize the toolbar displayed on right of the screen, when we open the camera …

Camera view is the old one, but one could notice the details

The left bottom side has the battery icon and then quality icon next to that (showing 8M means 8MP now), in next to that its the count of remaining photos that could be snapped with current remaining free space, I am not exactly sure about the icon next to that, but that’s probably says the same the remaining space.. the last icon is GPS one. If its not showing x then it means that location is locked and you are ready to go with GPS info tagged inside the pics.

As told by one of my friend on twitter, I noticed a probably bug in Nokia N86. After taking an image with GPS info on, even when you close down the camera, you find a GPS icon on the right top of your phone screen, when nothing is using GPS right then. Not sure what it is..

I find myself specially hooked up with panorama mode of Nokia N86. Its nothing that we haven’t seen it earlier, but it never seem to be this much smooth and perfect in any earlier camera. Earlier only right and left key, now have became four ways. The speed of processing makes it instant to move on after it takes one shot and the results..

Though things get changed with moving object and situations a little, but its sure not a fault of Nokia N86.

But what’s the big deal here is the basic video editing options..

Do you know what impressed me about Nokia N86 most? It was the macro mode performance of wide angle lens. Its just not the pixels, but see the finer details in next few random samples I took in my office…

So, what’s say? Do you still believe that there was nothing in this world better than Nokia N82?