After setting up Prometheus, Grafana over Linux host, I was approached for similar setup over Windows. That had separate set of challenges since Prometheus and Grafana projects, despite of requests in last couple of years, are not yet compatible with Microsoft Service Framework. Even official documentation proposes solution via nssm, which is another OSS project (in a way).

Though I would have created similar step by step doc for Windows, thought to do better this time and almost half day work brought us a PowerShell script, which can download almost all the latest packages (except nssm, which is not github hosted) and then proceed to configure them on the same machine. Functions to download and create services are created in a way that select set of package can be downloaded or installed as putting everything on the same server may not be good idea.

This is still not ready for production use as there might be random quirks but here we do with the complete script, which has an experiment Prometheus configuration function as well. 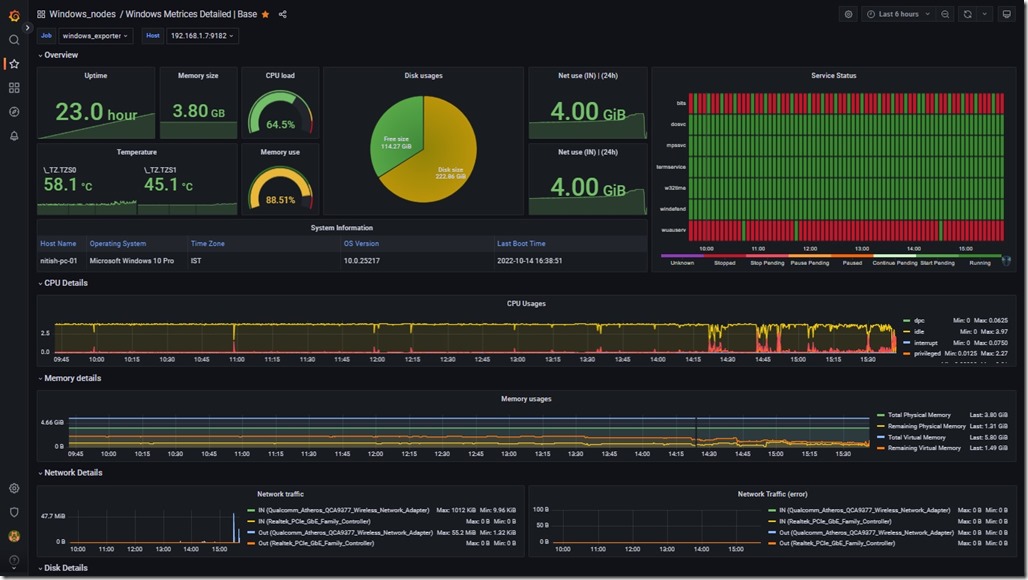 In last post, we created Dashboards for Linux nodes monitoring. Please note, Linux and Windows are not only things which can be monitored but would leave that part to figure you out in case if you have any use case.

Let’s talk about creating a Windows summary dashboard this time like below one. It’s for just one node but it would keep on scaling as more nodes added in Prometheus target config.

END_OF_DOCUMENT_TOKEN_TO_BE_REPLACED

Recently in pursuit of Open Source solution to monitor a stack of Jenkins and Team City nodes, I got chance to explore Prometheus and Grafana, which brought back all the fun, I used to have with CentOS and Open Source. That prompted me to write a step-by-step guide about setting up one.

Roughly 12 years back, I wrote a blog about Zabbix Monitoring when I was managing couple of data centres of a BPO in Delhi. In those days, I worked over a number of solutions over CentOS but later on in career,  I got more engaged in Windows side of world. Microsoft Azure, O365 and more so Windows PowerShell and lost touch with such Open Source solutions for monitoring. But what better to resume the touch than Prometheus and Grafana. 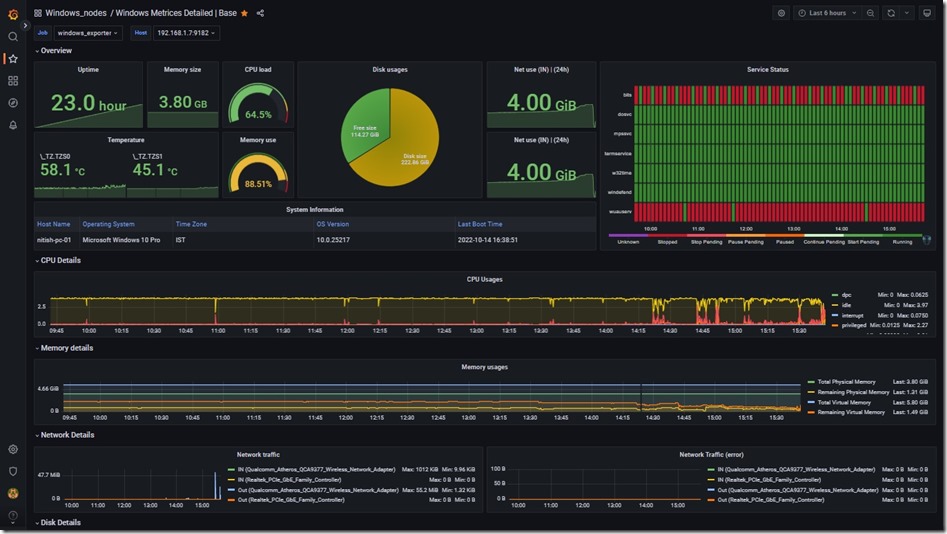 Let’s go through introduction first, what is Prometheus? Some sci-fi movie title?

Prometheus is an open-source systems monitoring and alerting toolkit originally built at SoundCloud to meet requirements like a multi-dimensional data model, operational simplicity, scalable data collection, and a powerful query language, all in a single tool. The project was open-source from the beginning and began to be used by Boxever and Docker users as well, despite not being explicitly announced. Prometheus was inspired by the monitoring tool Borgmon used at Google. In May 2016, the Cloud Native Computing Foundation accepted Prometheus as its second incubated project, after Kubernetes. The blog post announcing this stated that the tool was in use at many companies including DigitalOcean, Ericsson, CoreOS, Weaveworks, Red Hat, and Google.

Grafana is a multi-platform open source analytics and interactive visualization web application. It provides charts, graphs, and alerts for the web when connected to supported data sources. A licensed Grafana Enterprise version with additional capabilities is also available as a self-hosted installation or an account on the Grafana Labs cloud service. It is expandable through a plug-in system. End users can create complex monitoring dashboards using interactive query builders. Grafana is divided into a front end and back end, written in TypeScript and Go, respectively.

As a visualization tool, Grafana is a popular component in monitoring stacks, often used in combination with time series databases such as InfluxDB, Prometheus and Graphite; monitoring platforms such as Sensu, Icinga, Checkmk, Zabbix, Netdata, and PRTG; SIEMs such as Elasticsearch and Splunk; and other data sources.

Ok enough of introduction, let’s begin with steps to setup one. END_OF_DOCUMENT_TOKEN_TO_BE_REPLACED