Have you got your invitation yet? Few days back, we were hearing the same about Google Wave and now we are hearing the same about New Orkut. Luckily getting to new version of orkut wasn’t that tougher as getting hands on Google Wave seems to be. In the ads, it was asked to join the community to get an invitation, although I didn’t liked the idea very much to join a community for sake of just getting an invitation, which in turns finally I didn’t got from. 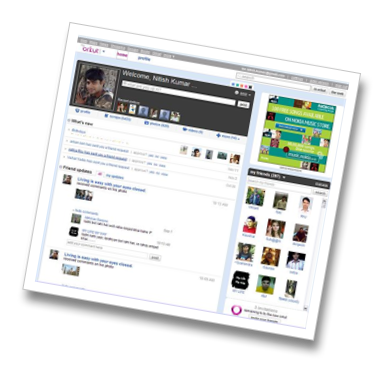 As we can see that it’s completely rebuilt interface with heavy use of ajax everywhere and as their official blog says for building it they have make use of Google Web Toolkit (GWT) throughout. With what they been successful is bringing most of the things integrated on the first page itself, either its community handling, friends management, scraps, photos or anything else. I was very much impressed with Photos handling obviously, which is now at par with Facebook or other such sites. The interface to handle photos is very intuitive and blazing faster than the earlier version.

As other bloggers pointed out, here are some new features:

Although I still remember Orkut’s early days when the focus was to keep the interface simple and specially that blue throughout and I’m sure that many of us, will keep missing that simplest interface, which made us Orkut go higher places in comparison of Facebook or MySpace. But like technology is spreading and improving, changes are likely to touch the lives from every side and such an overhauling of Orkut interface was expected from long. So is this U-Turn from keep it simple and blue philosophy.

The new interface is sure useful in many senses for the users addicted to Orkut, but I also wish to point out that it might not be that easy or attractive for the new users coming into it. For new users, its just the same like MySpace or Facebook and I am not sure that you could win new users from there. Let’s see, how this new version proceeds.

Suppose you got the invitation for The New Orkut but after playing with the new interface for few hours, you want to go to the old version of Orkut then you can do it by following instructions.

“How To Get the Older Version Back in The New Orkut?”

You will switch back to the older version of the Orkut by going at the “older version” option in the top right corner of the new Orkut interface. Click on it and you will back into the old Orkut world. Simply click on the link “try the new Orkut”, in the top navigation bar, if you want to go into the New Orkut.

If we talk about users opinions, then not to mention only few bloggers, but I didn’t found much of a positive buzz about this around friends. Few of them commented about missing features and most of them commented that they were used to of earlier version and this new interface will take time to adjust with. I guess, its like shifting from Windows XP interface to Windows 7. We may feel it better, but find no reasons to change. 🙂 So tell me after your experience about which version of Orkut is better, the old one or the new one?