Continuing with my own trend of being late into things, here I am with the latest debate raised by Environmental Minister Jairam Ramesh, when on April 02, 2010 at seventh convocation ceremony of Indian Institude of Forest management, he termed the wearing of the traditional convocation robe as a ‘barbaric colonial practice’. 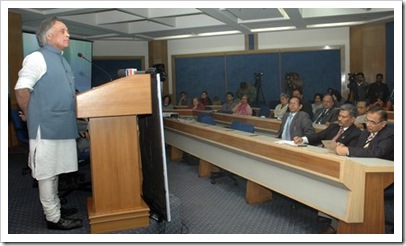 Sometimes we educated people find ourselves really in weird state of mind, when finding things like this get attention more than the issues that affect common man’s life. May be the statement make some sense, but doesn’t the whole education system must be a matter of more concerns than a uniform thing?

In reference of the same, I found the Mumbai Mirror article a real good read. It reports that this isn’t the first instance, when such a disagreement with the customs might have been shown. Lawyers in Mumbai’s civil and sessions courts moved a resolution making black gowns optional (Though that demand had more to do with Mumbai’s humid weather than anti-colonial sentiments, the flowing gowns have been discarded). Similarly, In 2004, the department of posts decided to change the uniform of their postmen from the heavy khaki of the colonial era to blue trousers and shirts. It was felt that the old uniform with embellishments like metal buttons and cap was unsuitable for India’s weather.

Sure, these demands weren’t in same context in which Mr. Jairam has taken his concerns, but sure its not unusual to expect something like this from our politicians. Still I am not condemning it, just try to reason with facts …

Hasn’t this be the case many times that we have changed names of streets, buildings  and roads in name of our leaders from old British names? Haven’t people find more pride in calling Mumbai rather than long established name Bombay now? What’s wrong if someone is talking about changing one more thing ….

Most of us don’t mind wearing jeans, paint-shirts or even foreign brands coz it reasons well for convenience. We reason with renaming of roads, bus/ railways stations and buildings in name of Indians as even in that time, when it was named, it was named to honor someone without caring for our sentiments or might be renamed from some other names.

Similarly, it seems justified if wearing gowns on occasion of convocation reminds us of the fact that its a British custom. But there are many other things to think upon, let’s know about a few ….

If you calling uniforms off then why not to apply the same on doctors, nurses, postmen, constables, police officers, army or similar of those? Why shouldn’t they also be relaxed? Though I know that it doesn’t matter for them coz doesn’t influence cheap votes, but I wish if the concerns were for changing something that actually affects students.