Its very easy to blame things and saying that Symbian is dead, but it takes genuine talent and vision to show that its not the technology, but its what you do with it. The transparent and split keypad design of Gravity that I was talking about in last post, finally arrives in Alpha stage and available for reviewing it, which stands for just another example that its not rocket science to fix the things.

If you might have given such a regarded name like Gravity, then it becomes difficult to exceed the expectations from himself and it janole, who always came up to raise the bar. Let’s see, what he doing with Symbian this time ..

What special about this custom keyboard?

Not the very first time, when someone might have taken the task of creating a custom keyboard for some app only. If you are unable to recall, then let me remind you, you have seen the keypad of opera mobile. 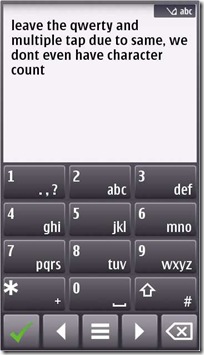 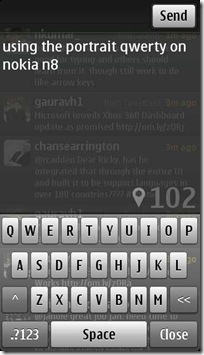 But when it comes to design something like so native yet so important then usually developers feel out of innovation. While it doesn’t look so in first glance, there are too many minor details that could go bad, when designing a keyboard, like right size of keys (see smaller and almost unusable Opera Keys) or no mention of word count in native Non-QWERTY keypad on Symbian^3 as of now at least. Not only that, but even most basic things that people always taken for granted, when get designed from ground up, the suddenly become a challenge.

Though its only an Alpha build and still lots of things are missing here, but in the above screen shot, you find the following things special:

1. Transparent design, which don’t let you slip the context for which you were writing
2. A glossy touch in buttons and background behind them
3. Word count and that too in enough big fonts +1 from my side
4. An entire new, generic or Google map kind of Geo Tag sign, look more relevant than earlier now
5. Largest screen real state provided to the text in comparison to others
6. A big space bar in the middle of bottom
7. Send button on top means no accidental sending

Not sure that its the same split keypad design that I was assuming it to be in last post, but its sure look exactly, what I thought touch keypad must have looked like

What are the tricks with this keypad?

Well, the very first thing you will get comfortable with is gonna be the landscape mode due to bigger room and bigger keys, but for some strange reasons, the send button is missing here (obviously just got now).

In the first build that was 1.32 6670, there was a little space remaining on the top, which you can’t really notice easily but could have taken advantage by sliding the finger upside and the tweet was posted. Though it was a annoyance too as caused many accidental tweets by me, when I was trying to adjust some words. Anyway, janole removed the option with second build that is 1.32 6671.

On pressing the close button, then tweet will go in draft mode and then you can use the same old send from there, though same wont be the case when you will be sharing some pics from images section means you have to go to portrait after typing there.

The geo tag get a blue color here, in place of green earlier, dark grey when selected and trying to get a lock, faded grey, when not opted. Though I have not figured out that what color does it take when get a network based lock only, which was orange in case of earlier gravity build. Still I guess Green and Orange were better.

The up arrow icon in left side, works for caps lock and the double arrow in the right works for the backspace (though backspace doesn’t work like Swype for deleting whole world in once), but the most exciting thing is inside the second screenshot if you would have noticed the highlighted V letter. Yes! you guessed right, Janole has not only raised the bar by bringing the split keyboard kind of design, but also the multi-touch (at least for one option) to the keypad.

You also find the special character support here, like the one shown in first screen shot that appears when you press and hold ‘P’ and similar with some other keys which might bring some variants.

P.S. Forgive for that annoying sign of connection failed due to poor connection at my place.

Keeping the numeric keypad behind the press of bottom left button might be uncomfortable for people, who might have gotten much used to of Swype, but still I will call this a neat design. 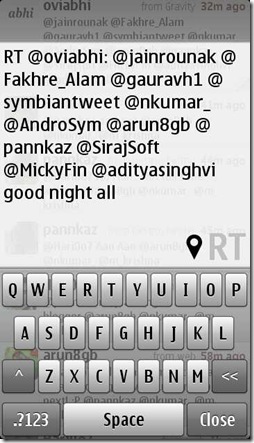 Reply/ Send/ Retweet buttons appearing in portrait mode only as of now. Though, if your retweet exceeds 140 character limit, then you wont be able to see the button, even if touching at the same place will still work for sending off the tweet.

What’s still pending and could be expected in final build?

Not sure that Janole took this task as just an addon to Gravity or really thought since start that how big it could be, but I am sure that initial responses might have given a clue that people really wanted an alternative of default layout. But when we look closer then the smoothness of the design is still without some very basic things.

Besides, the above, there are something, which we kept on asking from Janole from quite a while like auto completion of names, which sure gonna be possible once the predictive tying and custom dictionary makes the way to here, which will be a toll over the performance as well. Not sure, if it would be an easy thing to do.

Here is the download link for the same Alpha Build of Gravity, give it a try and feel that its not the case that Symbian is dead, its the way its being handled by developers, who are probably confused in fragmentation.

So these are some of my observations and inputs about this Alpha build. Please comment, if you want some more or I missed something important here. Yours words will reach to Janole.