Yeah! It would be one of the rarest occasions when I might be posting about just a hands on, but a hands on over a Smart phone having 41mp camera in it, is rare of rarest in itself. it was hard to keep the excitement within and I know you wanted to listen from me about it…

It started from an invite from Aditya (@adityavnathan) about a Nokia Reviewers workshop in Hotel Oberai, New Delhi for April 10, 2012, with Vesa Jutila, Head of Symbian Smartphones Product Marketing, Smart Devices at Nokia.

While the name of Vesa Jutila was a hint in itself, I was already hinted that it’s about Nokia Pureview 808.

I knew that Tuesday will be a weekday and it wont be easy to bunk the newly joined office in middle, but when it’s about Nokia Pureview 808, it was hard to stop someone who been proud owner of Nokia N82 and Nokia N8-00 and there I was and some other blogger friends…. 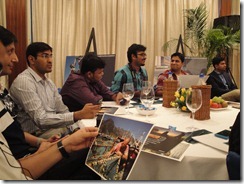 Apart from our own Vipul Mehrotra, we were greeted by two gentlemen from Finland, Vesa Jutila and Ari Partinen, who started the event by telling us that for Nokia, how instrumental Symbian still is and how innovations like Pureview are a sign that how Nokia still cares for Symbian.

Also a mention of Nokia PureView technologies as a collective should shutup the tech blogs popping each day with rumor that if a Pureview Lumia coming … ofcourse its coming, not just one but many. Its obvious.

Vesa explained that PureView tech means 1) High-performance sensors 2) Image processing algorithms and 3) Precision Carl Zeiss optics. A Symbian device is just the first one and the branding will continue for long from here in many a products, specially Windows Phones (though he refused to comment on a MeeGo Pureview in conversation with me later on).

He emphasized over the size of sensor itself and while we would have seen those pictures of lens component, seeing it in hands was believing in it.

Vesa Jutila also answered one of my question that if there is a possibility of licensing the PureView tech to other players as well and the answer was straight NO. Pureview will remain propriety to Nokia only. 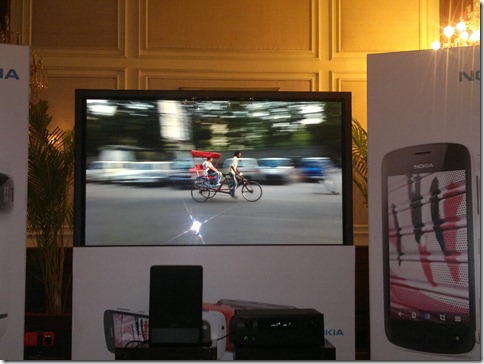 We seen some of the breath taking shots, never seen before imaging details via a mobile camera and some amazing time lapse videos.

It was also demonstrated that how much difference the PureView tech brings about the Audio Quality as well. 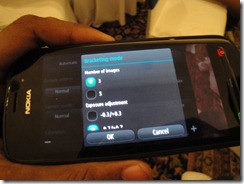 Not only this, but PureView is collection of many other striking features as well via the camera app on Nokia 808. Like inbuilt time-lapse mode that allows you to take up to 1500 photos at intervals of 5-60 seconds, the bracketing mode and ISO variations up to ISO 1600.

You can take a short walkthrough of camera interface via this official demonstration by the man himself.

We all have heard and read enough the camera part, so I would start from talking about the phone itself. How it looks like, how it feels like, how the new Symbian is? How the hardware (top of any Symbian device ever would have received) feels?

Apart from 41mp camera, 4” CBD AMOLED Screen, 1.3 GHz ARM Single Core Processor inside, a Separate GPU to handle image operations and 512 MB RAM, this is definitely the best specs Symbian might have ever got till date.

Well! Looking at pictures, it certainly does not look like Nokia N8 neither does it feel like Nokia C7 or Nokia Oro that I have. From the front the design looked something like that of Nokia 603. The three buttons in bottom in the same way as we would have seen with very old Nokia 5800 or Nokia 5233 likes. But feeing it in own hands is what makes you understand that its a lot different.

Having my hands on Nokia N9 and Nokia Lumia 800, it was not hard to notice that this is not the plastic but the polycarbonate material as we seen in recent Nokia phones. This time it has a ceramic like finish, which suits Nokia 808 with slightly curved Gorilla glass and stainless steal as other building blocks. 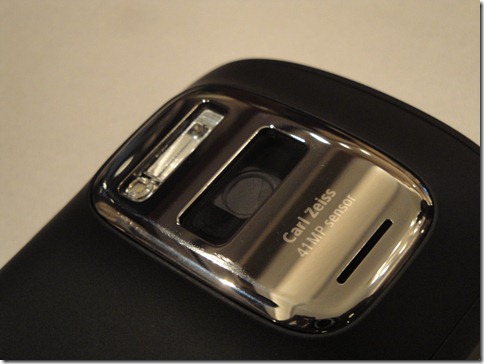 I had my own doubts about the camera positioning on the back and yes the position of the speaker on the backside, so it was one of the first point that I checked about the build. The camera module has a stainless steal bezel and open camera like Nokia N8, so the next point to check was if the glass over camera is Gorilla or not. Relaxed that it is Gorilla Glass means not that much prone to scratches. 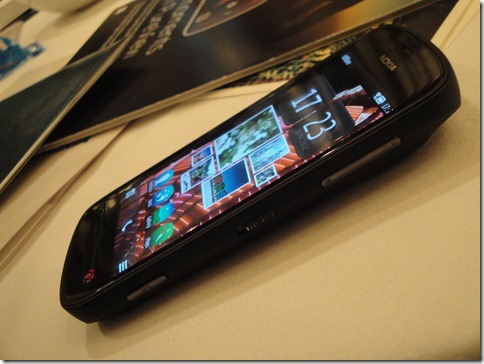 Positioning of speakers still prone to be muffled if kept on some bed or something.

What’s the fuss about the new Nokia Belle Feature Pack 1? Any differences?

All we heard about Nokia Belle Feature Pack 1 was inclusion of Dolby Digital Plus, 20+ new widgets, a new browser with better HTML5 support (a moderate score of 210+ though), a better notification bars, a better multi-tasking view and most importantly over clocking of processor to the speed 1.3 GHz. (sigh! a no go for Nokia N8 likes), so it was the time to check it out. 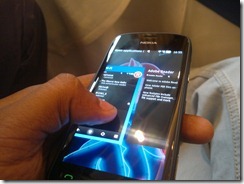 While the whole interface feels snappy with 1.3GHz processor, Nokia Belle Feature pack 1 throws a lot of new animations in. One of the noticeable one was zoom out of whole screen on rotating the device by say 15% and then zooming back in. Also nice animations inside camera app after taking the snap. Moreover, in general interface, check out the flattened home screen context menu. Things have started looking glossy on Symbian now. 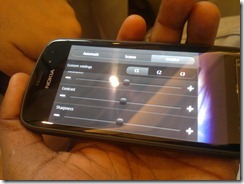 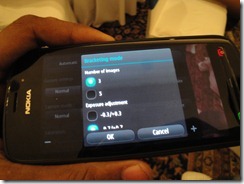 The camera app itself has totally revamped and in first look, seemed to have taken a lot of cues from Nokia N9 camera app (no non-destructive image editing for Symbian though, though it would have been epic) though as much I dived into it, it felt like some other level. Sad that Nokia Belle Feature Pack 1 not coming to our Nokia N8. 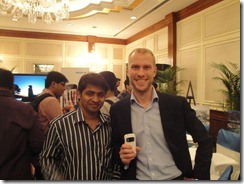 It was a fun evening, where we bloggers had a lot of fun together. Me and @SamDLaw specially spent a lot of time with Vesa Jutila himself. Only sad part was the comment from Vesa Jutila in answer of the question that if its gonna have a price like some 40k INR in India? He said “Nokia 808 is a premium product and they are not looking to sell it in masses but to set a niche”.

There were mentions for some Pureview accessories as well, that will be sold separately like Tripod like this universional Tripod  and a hard cover for Nokia 808 including the lens cap.

Note: As pointed out by @lunaticpsyche, the picture shown above is of a Joby Gorillapod (NOT a Nokia Accessory).

So, this was all about the amazing evening and experience. Do you have any questions about Nokia PureView? Guide them this way, I will try to get them answered.