I am not sure that I ever would have reviewed a product and would have rated it as “An Essential Accessory” but there is always a first and for me, it happened to be Proporta USB Turbocharger.

Smartphones and their battery life, something most of the users talk about, bitch about many a times because of the simple fact of life, if your phone is out of battery, then there is no difference between a 7mm thick phone and a 17mm thick one. But still the temptation of owning a slim phone is something that neither manufacturers nor users are giving up.

Its not that manufacturers and users are not trying for the solutions/workarounds and its definitely not the case that you can’t do anything about it.There are two ways to deal with it; spare batteries and portable chargers. Lets discuss both a little.

The regular readers here would not have missed my review about Mugen Batteries in past and the friends on Twitter and real life would have seen that how those batteries remained an integral part of my daily routines (and some of the regular issues). As time passes by, you learn about some of the limitations around these extra-power/replacement batteries, like the ones given below:

1. NO HOT SWAPPING: If you are running out of battery then you need to remove that battery and use the spare battery. Obviously, this involves switching off your phone for once even if for half a min only.

2. Battery Calibration: With the spare battery solution, you get two types of spare batteries; either of same power (mAH) or of extra power (more juice). The issue is, most of the time, the underlying OS is not that smart to handle this and you need to calibrate the batteries (many a times, its 2-3 cycles means 2-3 days long process) otherwise you wont be able to take full advantage of the juice that these batteries can provide to you. Obviously a cumbersome thing for the n00bs and for even geeks.

3. The size & shape: Love it or hate it, most of the Smartphone manufacturers nowadays feel like flaunting the slimness of their phones rather than caring for the fact that how much long the “slim” battery lasts for the user. For overcoming the issue, the user either has to use his device less or have to carry a charger with him all the time or have to opt for a thick battery for him that obviously negates the first cause that was slimness. Truth is, people don’t prefer to show their phones as thick stabs.

4. No separate charging: A spare battery can not be charged in separate, it has to be in device for getting charged. Means if you are preparing for some trip, then you first charge your first battery, then you pull out the battery and then charge the other one. Obviously a big amount of time required and when you put it on a scale of daily routine, then it becomes a mess.

5. Multi-usability: The issue with spare batteries, is their being specific for one handset. The smart users who need such things are actually carrying more than one devices with them and not only that but also changing the devices by each year. Is it wise to keep on purchasing spare batteries for each of the device?

6. Price: As of now, if you buy a separate same capacity spare battery then the price remains reasonable but due to the type of tech involved in high capacity batteries, the price remains an issue in the later case. It might be as worse as 4-5 times higher than the stock battery price.

How I got introduced to Proporta?

After going through the first solution in detail, I decided to give the second option a try; the portable chargers like the one I seen in hands of @SamDLaw first (that was a Nokia DC-11 1500 mAh). 1500 mAh was not enough for me, so I was to look for other solutions and the biggest name I heard of in twitterverse was of Proporta; An expert in field of mobile phone accessories, cases and portable chargers. 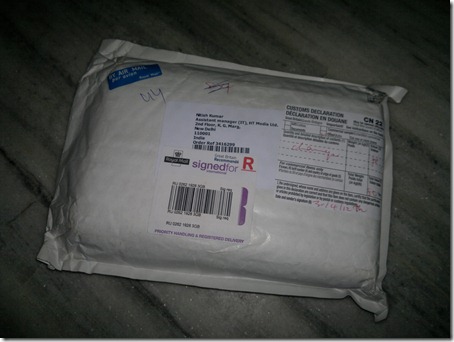 The wait didn’t took long and within days, I got a call from security of my office that “Sir! you got an Air Mail” and the well packaged accessory was in my hands.

I actually liked the cute gesture of putting a small tea-bag along with package.

And this was how the package looked like from the front with emphasis on the terms: Powerful, Rechargable & Portable. Also notice the fact that it may provide charging for Apple products, Digital cameras and other USB powered devices as well.

While the device itself has a nice rubberised metal texture and looks, we are in for a nice little bag as well.

This is the complete content of the package. One interesting folding wire and six different connectors to serve most of the current mobile devices (except the odd ones or older fat pin Nokia devices). 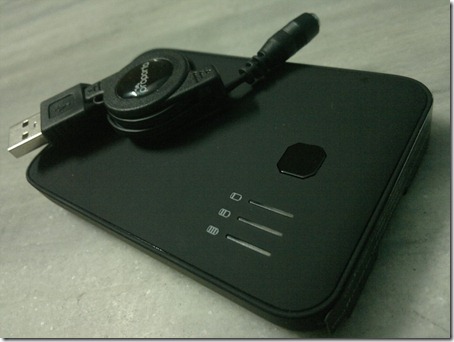 There is only one button on the device and then you find three blue LEDs denoting the level of charge left in it. 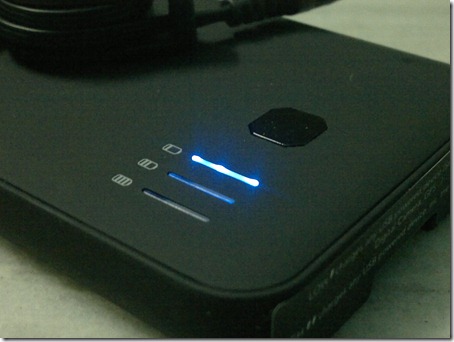 While the idea of three blue LED strips is quite great in concept, in real it appeared as just rough idea of it. It provides rough idea of charging a device or idea of getting charged itself. But many a times, I found it inaccurate though. Also there is no Auto off, once you pull out a device from it and you have press the button manually.

There are three ports in it, two are the USB ports and one is input port. One of USB port is labelled as High and one as Low due to difference in power output they provide.

Apple devices like iPad etc will get charged by High port only though there is literally no issue in charging other devices from the high charging itself.

One of the other thing to notice is the retractable cable supplied (USB to female generic, with a bundle of device-specific tips – microUSB, miniUSB, Apple iPod, Sony Ericsson, Nintendo DS Lite, Nokia 2mm) is quite thin and besides the long time handling part itself, some forums say that it might be an issue for 1A current that is provided by High Charging port.

I actually didn’t use the provided cable for charging my devices and relied on their original USB cables, so it should not be a problem.

The biggest profit of Proporta for me, was the liberty from almost all the issues that I mentioned in first section. This was almost exactly the thing that I or many others might be wishing for. The perfect companion for heavy smartphone users or even those who are preparing for some long outing.

I can start charging a device while I am still on call (Hot Swapping), I don’t need any kind of calibration as I am literally using the same battery in device, the shape of the device will be unchanged, I can charge almost all of the mobile devices I own and last but not the least is the price.

Proporta USB Turbocharger 5000 costs just 34.95 Euro or $50.3 or around 2.5k INR that is also inclusive of shipping charges as Proporta ships it free of cost.

I still want to appeal Proporta for getting into a tie up with local Indian Retailers like Flikpart etc to sell their units directly into Indian market so that people might have more payment options than just credit card because I actually know many out there in my circle who would gladly buy this product if comes with an option to pay by NetBanking or option to Pay on Delivery. That would be really like some dream come true.

Now, where are the cons?

As I said in first paragraph, even if it might not be perfect in every sense, I would rate this device as an “Essential” Accessory to have (A first on Layman’s Take for any device I would have reviewed in past) and wont mind putting my money on it. This smart piece of tech not only look good, but comes with a very decent price and because of its versatile nature, is future proof as well. Its not a thing that only you might be using, but it will be useful for your friends/family while travelling and trust me, they will ask you that from where you bought one.

Rest I leave on readers. Do you think I did it right by calling it “An Essential Accessory to have”?