It might be a tough job for a blogger to review one of the Asha handset. Blame our own habits which are addicted to high end. But if one looks at Asha Series out of this Metro City Blogger mind set, then less chances to find it dull, in terms of the value it adds to the feature phone market that is still going steady and strong (even if we don’t feel that way on twitterverse or blogs).

While in the last review, I talked about Nokia Asha 300, now it is the time to talk about the real leader of the pack, Nokia Asha 303: One of the phones, over which Nokia thought to pull it back with low end handsets in Indian market. Let’s see how it is….

Nokia Asha 303 is finally the one to showcase a capacitive screen on S40 Touch and Type genre along with the honour of being a Nokia Touch-n-Type QWERTY at such low price point. In many ways, this seems to be the Nokia Asha handset which should have started the Asha Touch-n-Type Series in first place.

Nokia Asha 303: The content inside the box – the unboxing:

After reviewing Nokia Asha 300 recently, I was aware of the fact that what I should expect to come out from the box of Nokia Asha 303 and it happened to be exactly similar. Neither USB OTG cable nor any traditional microUSB cable. All we got from Nokia Asha 303 box was ..

As you can see, there are almost no changes in the content, then why the higher price?

The answer lies in its premium looks and big additions like capacitive screen, Wi-fi capability & well built QWERTY keypad. Let’s explore it more in next section covering the exterior of the device.

The unit that I got was Chrome unit and you can yourself see that how different it looks in comparison of the last Asha 300 that we seen lately. The metallic back was a kind of assurance for the durability of the device in the long run.

If you ask me about negatives then somehow the shape of the screen itself didn’t suit the looks otherwise rest of the shape and built quality may rival some of the biggies.

The front of the device showcases 2.4” Capacitive screen with a considerably thick bezel, four buttons under the screen and then an actually nice QWERTY keyboard in the bottom. 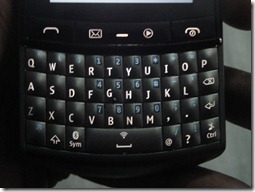 A large space button and almost same kind of key layout as its always been with E-Series handsets. Same back-lit keys with right amount of tactile feedback.

The top of the device makes the place for 2mm charging point, 3.5mm Audio jack and a micro USB port (Good to see that there is no creepy cap either).

The right side of the device has the volume keys and one lock key.

Turning the device towards back reveals the fact that we have got a 3.2 mp camera here that too without flash. Though on the positive note, we see a metallic battery cover matching the chrome finish as rest of the body and quite a sized one speakers.

So if I compare it from Nokia Asha 300, then lack of flash in camera continues, though we receive some big updates like a metallic premium finish, a much better speaker and obviously a much better QWERTY.

It would be a repeat for people who might have read the specs part in my last post about Nokia Asha 300, but let’s see what this new device has in its sleeves.

The first thing that gets the eyes is 2.6” LCD Transmissive capacitive single touch screen with a colour depth of 18 bits and a resolution of 240×320 pixels. Obviously no Gorilla glass here, neither you should expect some great visuals under the sun. An OK OK performance if we compare from high end though outstanding and accurate, if we go by the standard of feature phones or the phones in the similar price range.

In next, we have 1GHz Processor, 128 MB RAM and user storage up to 100 mb though it can be extended up to 32gb via MicroSD card (it ships with a 2Gb MicroSD card already).

The device also has Pentaband frequency (in comparison of Quad Band of Asha 300) though that part would be immaterial if the target market is Asia alone.

In comparison to Asha 300, Nokia Asha 303 steps back on Camera front and we are provided only 3.2 Mp camera while Asha 300 had a 5MP shooter. Video recordings remains same VGA @15 fps.

Other additions into specs sheet include USB OTG 1.3, OTA and Dial up networking etc (you can use your phone as a modem for your desktop).

With a capacitive screen, Nokia Asha 303 brings a lot of comfort for users when it comes to gaming etc. I made a short video demonstrating that what kind of titles you can expect to be there on S40 Touch-n-Type at a cost of Rs. 5/- (one tenth of a dollar).

Obviously, I was not playing the games in full spirit (just one hand used while other was busy shooting the video), but still I hope you can guess that the dumbphone is not dumb any more. 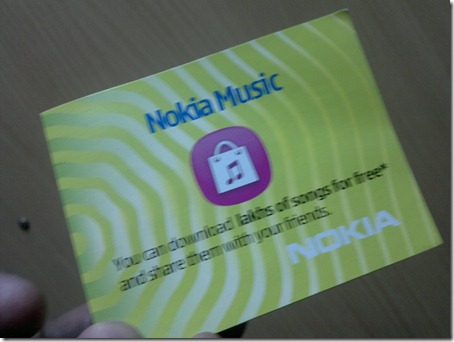 You can download free music via Nokia Music for an year and if I know right then this music is DRM free as well means you can play the same over your other devices as well. I downloaded two latest of tracks (Rowdy Rathaur & Ishqzade myself.

Notice the loudness of speakers. 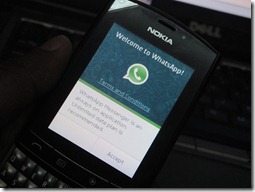 Then there are these third party clients like Whatsapp, which doesn’t let you feel that you are on some low end device. S40 Touch-n-Type devices got a client for Whatsapp that is also capable of sending pictures\videos\audios etc and has emocons as well.

Also there are other interesting apps like Facebook Chat, The Hindu, Zyanga etc. Zyanga in particular is a very interesting app that allows you to watch TV channels live on your Asha 303 phone. If you wanna see Zyanga in action, then here goes the video…

As you can see, the video quality seems terrible though Audio quality is top notch and I wont blame the app first as it might be my Wi-fi issue as well.

On the negative side of experience, 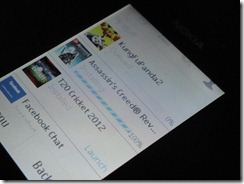 I felt Wi-fi management on a weaker side as many of the apps going for GSM connection by default. Also like other Nokia devices, you can not buy or update the apps if the SIM is not inside even if device is Wi-fi capable (though that is by design). Also the Nokia Maps been unable to lock my position all the time even in presence of Wi-Fi and GSM connection both.

But on the other side I think, if I am asking too much of perfection from a feature phone?

For a smartphone user, it would not be an easy job to perceive that what value the Asha Series is bringing to this particular feature phone segment and in my view, the same people who are judging Galaxy Series or iPhones should not judge Asha series on same parameters.

With Nokia Asha 303 for a price of Rs. 7000/-, one gets a capacitive screen, wifi, USB OTG, Dial Up Networking, Pentaband capability, a premium build and many other things. Furthermore, the next update will possibly bring Exchange support to this device and will put it into one other league as well.

So decision is yours, if you are looking for it.