The bonus day adventures didn’t stopped over Ubuntu only, but I progressed further to get my hands on the other buzz making OS’s around. Chromium, MeeGo and Android are probably the lead generation of modern OS’s and though I failed to get MeeGo running on Nokia Booklet 3G, but for rest of the two at least Installation part was no-brainer.

I know not only me, but many people out there are surprised over no support of MeeGo over Nokia Booklet 3G. An OS developed by Nokia and Intel is not running over a Nokia designed Netbook that has Intel Processor, Chipset and Graphics hardware. Irony!!! But it is.. my attempts to get MeeGo booting on Nokia Booklet 3G are all going fruitless till now. Thanks the other two OS didn’t disappointed me the same way.

There been many discussions around Android on Netbooks and even the most popular blog over Google Operating system puts a comment over it. Searches point over some very complex installation methods that may scare the hell out of you. But the basic point of all is, currently not many drivers exists in real world to make all the inside components of a Netbook running perfectly with Android.

Yes, it is as disappointing as it sounds, but as much I felt after having hands on it, what I got is this. It was LiveAndroid as even after my tries, I haven’t go the version, ThunderSoft people talking about. May be my opinion will get a change when I come across that version or if get some netbook with complete touch screen support like the first video on this link. 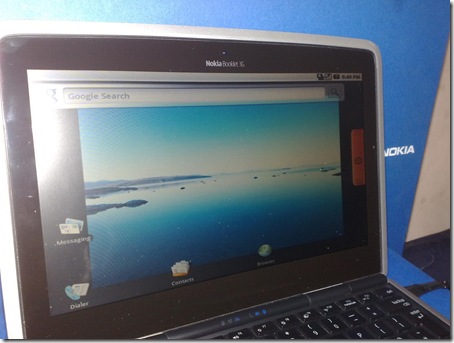 Google Android still seems to be a Mobile Operating System only and Google seems to have no plans about porting it in any form to Netbooks as well. Though may be someday few geeks could come up with their custom solutions around this, but as of now.. check the video given below to know what I am talking about.

It may look snappy, but all the things keeps on crashing. This thing not detecting 3G Modem inside, most of the app as they are related to phone functions and probably made for touch usages seems to be useless here. May be you need to work around a lot to bring some of them running, but as of now, its not in shape of a Netbook OS as much I guess. But somewhere inside, I know the fault is of mine that I didn’t tried more harder as it was just an adventure of short time.

Though as per interface, it sure gives you idea that Mobile OS’s of today sure has a very good chance to make into Netbooks due to their snappy nature and easy navigation styles. Though its true they will always keep you tempted to touch on the screen icons lol !!!

The other attempt was with Chromium OS, Google’s OS targeting to Netbooks only. Though honestly speaking, I didn’t liked the interface much. I mean its nothing more than a Chromium browser built upon some invisible built of Linux, some small icons in top for Network etc, but nothing more. 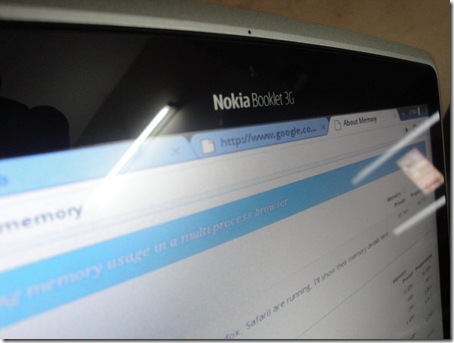 Though installation was easy and went exactly like the way, I did with Ubuntu, but still my opinion will remain the same that Google will be needed to push much harder to make people familiar with it.

May be I was not happy with Chromium OS more because I was not able to bring Network running over it that is something like essential to Chromium OS. Dear Google India is not ready for all time working Internet till now, its still a rare thing and top of that none of Network here or Wireless Cards of Nokia Booklet seemed to be supporting this OS. So, for me it was a failed attempt like Android. Though there is a console, so I think that there were more things to do for me.. which I didn’t .. 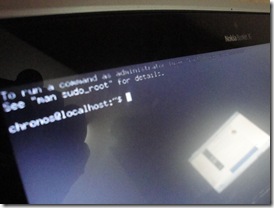 Waiting for your comments, if you can link some positive experiences, I really want to hear some positives about these two OS’s and Nokia Booklet 3G …

Now you can read updates from this blog delivered directly to your Nokia Smart Phone, download it here