Update: @janole just released the another version Gravity 1.5 Build 6712 for giving the same auto completion love to S60 v3 phones and some improvements for S60 V5/ S^3 as well.

1. Auto completion of handles and hashtags for S60 V3 phones. Needed to use arrow keys for selecting (becomes green on selection). 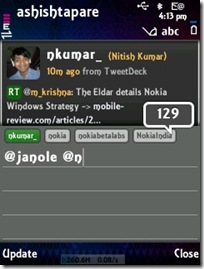 Thanks to Ashish for the pics

For Symbian^3 and S60 V5, you can notice that auto completion now starting with typing of ‘@’ only, otherwise it was waiting for one more word earlier. Same for Hash Tags as well.

2. The support for Opera Browser for opening the links. Earlier it was opening links in native browser only even if you would have chosen to set opera as default system wide.

If you use the twitter heavily and open the web links as well then you obviously know that how big this is, considering the state of default Symbian browser as of now. Now, Gravity just passes the link to Opera and one can continue browsing his timeline. Moreover, new links if opened, get opened in new tab without disturbing the old opened one. … making full use of Symbian Multi-tasking..

It becomes more bigger, when you come to know the fact that the inbuilt Gravity browser that @janole implemented sometimes back, not gonna get the cookies support even after Symbian PR2.0 a.k.a. Anna.

3. Another change is the way, you download the Gravity betas till now, Though its still the standard link like this http://bit.ly/6712ALL. and permanent URL like this http://mobileways.de/latest/gravity-beta.sisx, but now the default page when opened from desktop browser, offers you options like this

Earlier the desktop site was providing you the combined file that was bigger in size obviously.

Though in same reference, still what remains due over @janole is to upload the latest version in Ovi Store where one gets only some old 1.32 version and also update the info and updates section to reflect the latest build. I guess then he would also be needed to write a changelog on every update 😉

Hearing the news about roll out of Gingerbread on Galaxy S and hating the delay about the Symbian PR2.0 a.k.a. Anna more and more? Don’t worry there is always a rescuer for Symbian like always. Our @janole. Yes! the best twitter client of Symbian has got updated again and this time, I bet you can’t help but say WOW!

This must be a sweet coincidence that I was just running a quiz kind of.. on my twitter timeline that if gravity has more fans than Nokia. I think now people might have got the means that why I was saying the same 😉

I must say that I am feeling the same excitement as I felt when Gravity got the split portrait Keyboard for the first time. Let’s take a quick look over the awesome change log this time.

1. Auto suggestion of handles and hashtags: That really amazes me that how @janole goes perfect almost all the time. First the implementation of portrait QWERTY was something that even Nokia failed to do till now and now this name/hashtag auto-completion that’s been a challenge for other twitter clients since long. 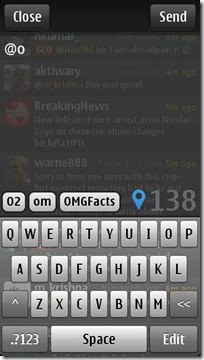 You just need to put an ‘@’ on Gravity virtual QWERTY and then with the first word written you start getting name suggestions depending on what people you follow or people who follow you and even the people, you might have last replied to. I am not sure of the same, but it seems that it shows a max three best suggestions in portrait and 6 in landscape, which keeps on changing as you type and for the auto complete, one just need to tap on the correct suggestion. Same about the hashtags, though I am not sure but it seems to be picking from your used hashtags only not the global hashtags (practical of course) 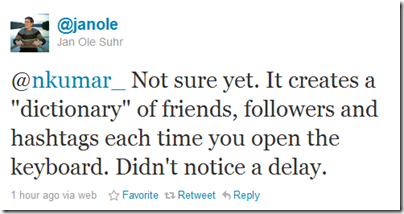 Interesting to note the fact that as per @janole Gravity indexes the names at the runtime, when the virtual keyboard opens (The same keep the list updated again). I was a little skeptical about the performance impact due to the same for people having long number of friends or followers but for my utter surprise, I didn’t felt even a momentary lag in opening the virtual QWERTY on my Nokia N8. I still will wait for comments from lower models users like Nokia 5800, but that certainly enhances the usability drastically. See the below screenshot on how to quick send DM. (Thanks to @HardikLive)

I have not seen any twitter client doing something similar and even Tweetdeck also offers the name Auto Completion in their web version but there is nothing such in their mobile client. Even web one (Chromedeck) doesn’t show up suggestion inline (you need to open the big box in the center).

2. Auto Caps on finally added to Gravity keyboard Though a permanent caps lock is still absent from Gravity keyboard, but @janole finally listened about the auto caps on for starting the statement.

You can see the shift key getting auto pressed when you start the tweet or put a space after ".". Simple but effective logic for most of the scenarios. I still think that permanent caps lock can be implemented easily in Android’s way by double tap on shift key and then could be shown as a little blue dot on the shift key (three bitmaps for shift key than two as of now). Am I right @janole ?

I think @Janole already working on it. May be a quick release very soon.

There is also a bad news about the last two features. These are available for S60 V5 and Symbian^3 only like the last few features. Not due to design decisions but due to resource limitations I guess. but still @janole already promised to bring the same love for S60 V3 very soon, so don’t feel very bad, if you have a S60 V3. Available for S60 V3 also with Build 6712 now.

Also note the fact that these features are for the Gravity Virtual QWERTY only not for the upcoming Anna portrait QWERTY (though that should not disappoint you as @janole himself mentioned that it wont be that good as Gravity KB). Though for compensating the same, @janole needs to work on dictionary system as well (T9), which I guess he already knows.

3. Layout fixes and Trends bug for S60 v3 fixed now: Though @janole mentioned about the Layout fixes in his tweet about this update but it was hard to notice if anything changed on my Nokia N8 about the layout. Not confirmed, but the layout fixes seems to be incorporating the changes required for the upcoming Nokia E6 with epic pixel density and VGA resolution. 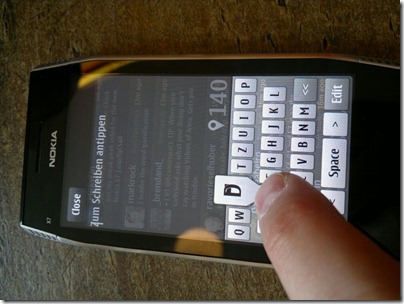 Though PR2.0 a.k.a. Symbian Anna rollout not started yet but people keeping an eye over the web must have spotted the font rendering related bug in yet to be released firmware like show above.

The version 6710 does a workaround about the by using non-transparent background on PR2.0 (for the keyboard part only I hope not the text pad part). 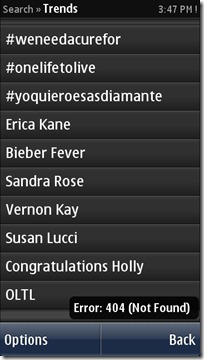 Though I myself didn’t got the same, but some users were reporting Trends related bug (Error: 404) in Gravity recently. Hopefully fixed now (for S60 V3 as well).

So, these are some of the changes as much I have noticed till now. I seriously hope that this time @janole wont get lazy and we will see an official changelog very soon. Till  then keep sending me updates or screenshots if you noticed any other change in new gravity. You can write to me on nitish@nitishkumar.net or could ping me on twitter via @nkumar_.