Don’t know if the trip to Dharamshala side has raised the bars or I am out of luck about hill trips in recent that not getting enough satisfaction from the hill drives. After last hill trip in April, last week of June 2016 seen another quick hill trip and this time destination was Lansdowne.

The plan for the trip came in mind as brother’s wife was dropping by for two days and we planned to take around hills. Later on, it was realized that it would be too hectic for her and the plan was dropped. But too late to save me from the poison of travel bug…..

We decided to take on the hill trip one week before it was planned and even though wanted to accommodate brother as well, it was again a family trip only. 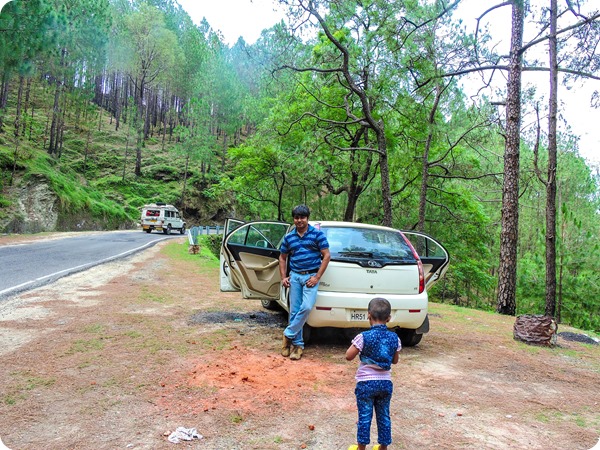 As been a norm for our hill trips, we started early from our apartment at Faridabad and first stop was taken at around 0530 hrs near Modinagar.

The route may be of less than 270kms, don’t expect to cover the same in less than 6 hours, thanks to road and traffic conditions. Not some kind of worse but not super highways either. We got stuck for few mins at Najibabad area, where Bus station/ Railways station by the road were enough to create jam. 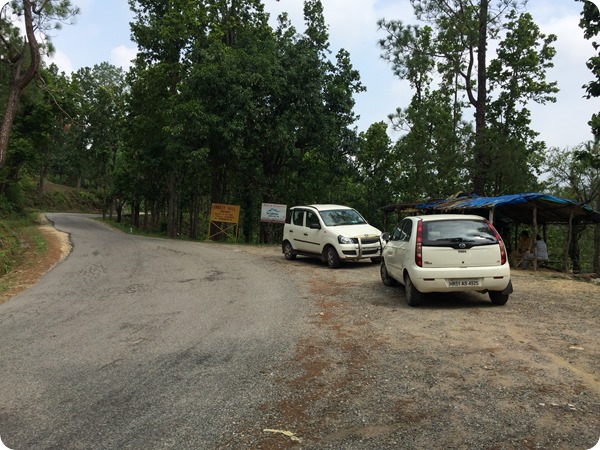 Before 0900 hrs, we had crossed Kotdwara which is the point from where hills start. The above pictures were taken around Mankot, which was few kms before.

And almost after 10kms another stop. Roads were ok in condition though on narrower side. Would have been trouble if both side traffic though that day being kind of non-season may be and early morning, it was manageable though bottleneck to speed. After taking many a stops, we might have reached there by some 1100 hrs.

Parking wasn’t tough though for my surprise, it was sufficiently crowded. Bigger surprise was the hotel room tariffs as none of them was either available or less than even 2000 Rs a night. This was sure high for such a small hill station as I expected such rates in Shimla etc but not in Lansdowne at least. Before even starting to explore the area, the decision was made that it would be single day trip than two days as it was earlier planned.

We stopped at good restaurant for the Aaloo-Paneer Paranthas and tea and then moved towards the lake. 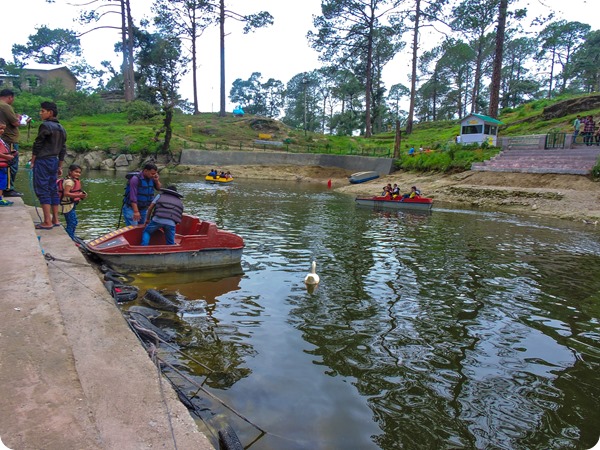 The lake, which even though might be looking ok in picture, wasn’t in good conditions in this season at least. Dirty and stopped water, not sure how it remains in other seasons or post rains. Good thing about it was proper parking place, nearby lawn etc.

Don’t remember exactly but Entry ticket prices were nominal and even boating prices were ok though we chosen not to do boating (time constraint and disliking for the water here). 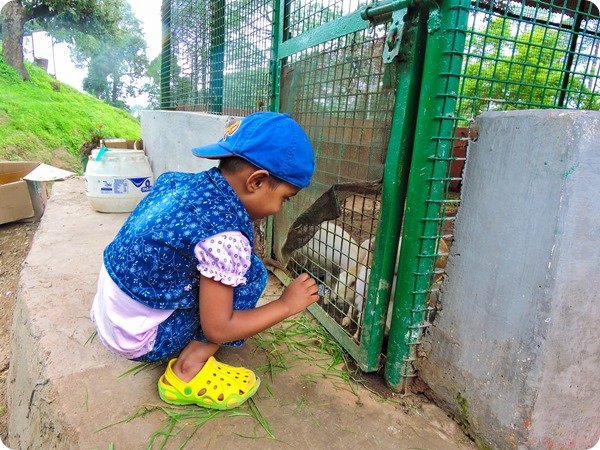 There was a rabbit house in the lawn side which was the main attraction for kiddo.

After spending almost an hour there, we moved towards tiffin top. After driving a little, there comes a place, where the road to tiffin top was mentioned but that seems to be for peddlers. Though some of the vehicles been managing to drive through there, I wasn’t too sure about it. Some other families like us been trying to enquire about it and soon a local guy passing by informed us about the main route for vehicles. 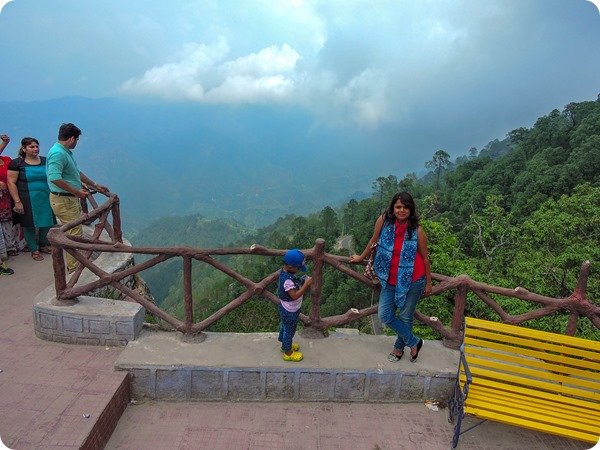 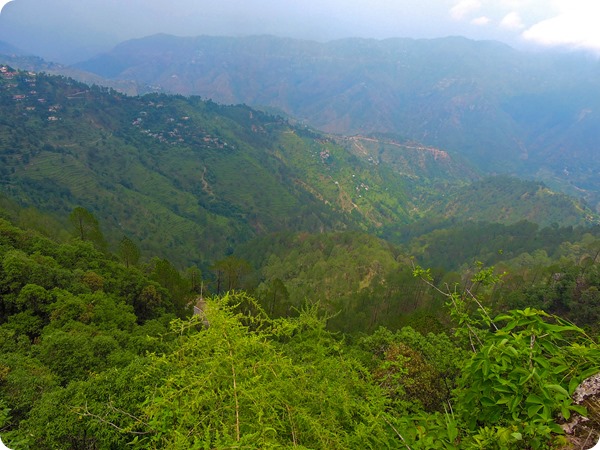 Views weren’t that clear but honestly speaking, the place looked good about sunrise and sunset only and unfortunately we didn’t had time for both. Parking options were bad at the place though we managed it. Must have left the spot within 30 mins and then decided to head back to home entirely. 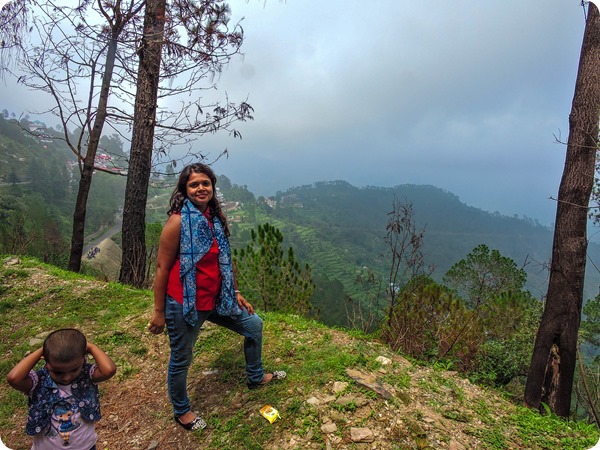 The above was at around 1430 hrs and it was still cloudy day all around. 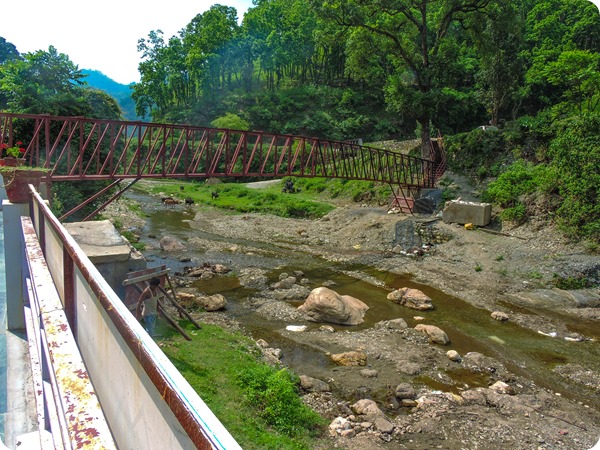 We took a break at some under construction hotel in midway. Many laborers been cleaning the river and I was thinking what if State Govt itself does the widening/ cleaning works on rivers under MNREGA etc. Important task considering the tourism etc, but then who know NGT ego may be hurt again to pass another random Tuglaq style order.

The place would be good photo stop in coming days.

The good times were to end once we were in plains. Area around Modinagar was hell for driving due to long traffic queues and despite of our tries, we reached home by 1000 hrs around only. It would have been 8hrs journey back to home but return journeys always feel longer. The good part was, I had a day off on next day.

Another hill trip was over and I was still unsatisfied from hills while winter seasons and snow still far away. Manali side anyway has been destroyed by NGT tantrums.