November 23, 2011 was the last time, when Gravity got the last update that was v2.00 Build 7009 and after exactly one month later, we got the preview build for the always exciting and innovation app Gravity that is actually a pride for Symbian. (Am I the only one who is reading the trend of exactly one month for each new build here? January 23, 2012 now?)

Even if its a time, when hard core Nokia fans are either moving towards Windows Phones or keeping it low most of the times in a tough battle against the growing base of Android, one must admit that post February 2011, Symbian^3 has seen tremendous activity under his name. Many Qt apps joined the pack to enhance the user experience, Nokia websites got redesigned in fancy blue and even if hopes of Symbian Belle (now Nokia Belle) kept on playing hide and seek with us, those who experienced the performance of Nokia N8 like old handsets with leaked Belle can guarantee you that nothing is finished yet.

Meanwhile the above debate is on, there was one app that was always standing apart of everything, apart of Belle, Anna, S60 etc, apart of Android vs iOS vs Symbian. Yes! our Gravity!! And we really waited impatiently for the next version of the same, not because of some bugs or some expectations, but just to wonder that what new innovation the all in one app Gravity brings for us this time. So, let’s take a ride of what we see new in this new build of Gravity (v2.50, Build 7025): 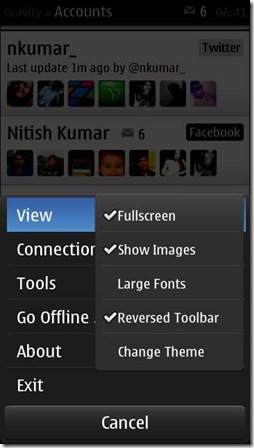 Though most of Nokia Community still don’t have access to Symbian Belle but once Symbian Belle arrived in market in form of some new handsets, it was unavoidable to ignore the UI navigation theme as on Symbian Belle that has shifted from those Options\Cancel button and taken form of icons now. The new build of Gravity tries to do the same though with addition of option to “reverse the toolbar” for those who feel its more natural to have options menu on the left like it been in Symbian always.

Minor UI changes but those who are already on Symbian Belle will appreciate it and those who are not, will get a preview of upcoming via this app.

2. Pull to Refresh and minor but noticeable change in design: 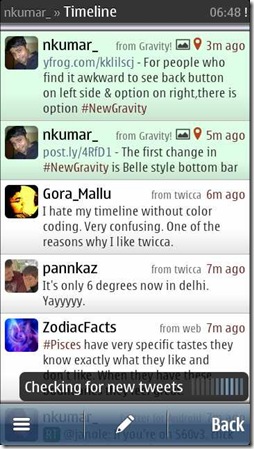 After tap to top, Gravity finally gets the most awaited feature that is pull to refresh. Pull to refresh is not limited to Twitter only but works in Facebook, FourSquare, Google Reader, YouTube etc as well.

The other minor change is replacement of text by icons (as been theme of Belle UI). You can see icon of a pen in place of New Button and Belle like options icon though I still wonder that why @janole didn’t replaced the Back button by an arrow icon? 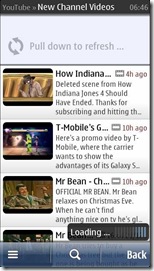 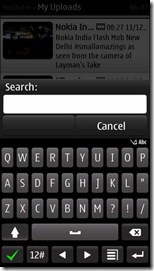 One of the feature addition with this new build is the option of YouTube account. While we already had the capability to play YouTube videos since last few builds, it was a one step forward to add accessibility of YouTube account in the form of familiar Gravity theme. It includes favorites, Watch it later, My Uploads, friends videos and you can always search with a split screen keyboard. Though I couldn’t find an option to upload some videos, but this is still great for a start.

I was personally expecting MISO and Tumblr to be part of Gravity by version 2.50, but as @janole said its a preview build only so may be later.

4. Google Reader section can now display the images as well: 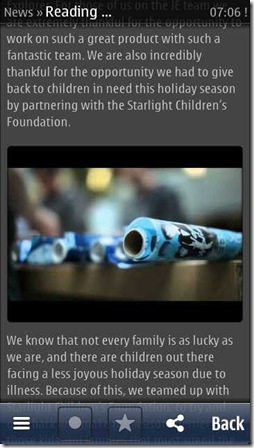 While today you might think it as one of those many features that Gravity added by this new build, but as @janole said, this was the main feature idea with which @janole started working on the new build. Again like other sections, we find the UI options going via small icons in place of Text (except the odd Back button like old days). Did you noticed the recording like icon for Read or Unread?

Must say, with inline picture display, now you can think of adding your Google Reader Account in Gravity permanently than using any other apps (be aware of heavy data usages though).

Though I find it odd that Google reader section can share the posts via Twitter only not via Facebook or any other service. Also while in outer menu, option to copy the link on clipboard is present, we miss the same in full post mode. May be next build bridges these gaps. 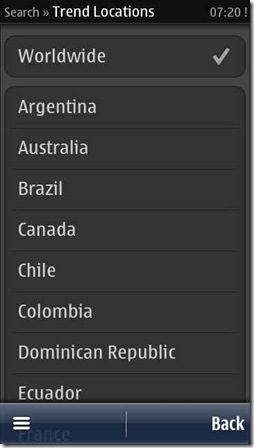 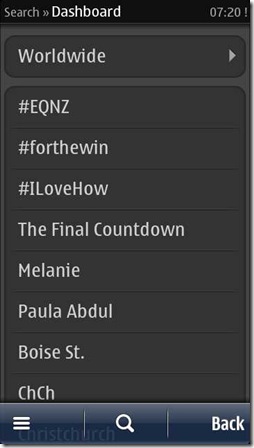 I don’t how many of you use Twitter Trends actively but for experienced users, its been an essential part of Twitter experience by which they can keep a tab on most important things happening around. In older version of Gravity, not much was configurable here, but with the new Gravity, you can check trends worldwide or by country specifically as well.

I must tell you, you gonna love it.

Since @janole has changed the UI for displaying the image preview and maps, it has enabled Gravity to do some more tricks. This one is the latest.

Zoom-In and Zoom-Out buttons are now added to UI in bottom bar and you no longer needed to remember the volume key shortcut for the same. Also the globe like icon next to option icon let you toggle between maps mode and satellite mode. 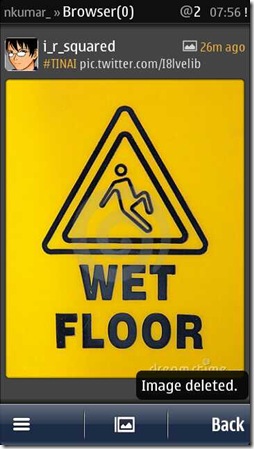 While Gravity already had probably the best support for displaying images from multiple services, addition of saving pictures option makes it a killer now. Gravity was already displaying the non-service images by just URL ending with .jpg, .png etc and with this, things gonna really really challenging for other clients across all platforms. Though the same feature is limited with Twitter Image previews only, but I see no reason that why @janole wont extend the same functionality for Facebook images as well in near future. Finally we can see the larger version of images via Native Gallery and can store it and zoom in.

Gravity was already storing the images earlier as well but those were kind of cache version hidden inside private folders of Symbian. Images will be saved in Images folder of E: drive now.

8. Many other minor changes

There might be many minor changes hidden inside that I am yet to discover though one of them was display of last user names with an “@” on the accounts screen (like the name of @aktiwary showing in the above screenshot).

What is still annoying with Gravity on Belle?

You can blame awesomeness of Gravity full screen mode that @janole always skipped to provide much support for non-full screen mode which remains one of those weak points about Gravity. Like in above screenshots, you can see that on Symbian Belle with full touch phones, one can not write a new tweet as there is no button for that neither than option for new tweet in menu. Also the Gravity Keyboard doesn’t work in non-full screen mode.

So, anything else you find in the new Gravity, do tell me?

Update: Avoid the old method as the latest firmware update method is very simple. Keep the files in place, open Product and flash. Use refurbish.

Original Firmware file link only: Download Link (Warning: It leaves only 20 mb around in C: drive of Nokia N8)

Updated link without Hero of Sparta: Download Link (It will leave you with around 130 mb in C: drive)

I will suggest you to use the second link which is created after removing Hero of Sparta files from the firmware.

Notice the speed this time.

Updated: Installed the second leaked version too via the same procedure and with new files. Haptic feedback and 6 home screens now. You can use exactly the same procedure while flashing. Note that even if you are already on Symbian Belle (earlier leaked one), you need to use the same Anna files (at least I did so successfully without any trouble).

So you bought a Nokia N8 last year and while reading a lot of negative buzz on internet and around you, started thinking if buying Nokia N8 (or even any other Symbian^3 device) was a wrong decision? But still keeping it around as there been no better camera phone than this ever nor seems likely any soon.

Think again… Haven’t you seen your Nokia N8 like brand new twice a time till now?

Once when you bought it and once you got Symbian Anna on it recently. Not enough? That was just kind of theme change in your eyes?

Be ready to see it like real brand new with Symbian Belle now. Yup! even though its so unlike Layman’s take, I decided to take the plunge and flashed Symbian Belle leaked firmware on it. So we paid once and will be having brand new device experience for more than three times.

1. DO NOT USE ANY OTHER THEME THAN INSTALLED. IT WILL CERTAINLY MAKE YOUR PHONE GO IN REBOOT LOOP.
I bricked mine while trying the same and the only  resolution was to flash it back to PR1.0 11.5 scanvidia. It was a scary ride for me as didn’t wanted to loose N8 in any case. Somehow managed to get over with it.

How to flash my Nokia N8 with Symbian Belle?

I know most of readers here never did any flashing with their Nokia Phones and no one wanna take a risk of bricking their phones, specially when it comes to Nokia N8. I know there will be many questions in your mind and I will try to get them answered, but first I want to make you clear that

1. FLASHING YOUR PHONE WITH ANY UNOFFICIAL FIRMWARE WILL VOID YOUR WARRANTY (though you can claim your warranty back once you are back on official firmware).

2. THERE ALWAYS WILL BE A RISK OF BRICKING YOUR DEVICE WHILE FLASHING, SO ITS AT YOUR RISK (Not advised for faint hearted)

So done with warning, I know you still are interested in the guide .. so here we go..

END_OF_DOCUMENT_TOKEN_TO_BE_REPLACED

Nokia Facebook page was a hot topic among Nokia Fans and bloggers since some days due to a mysterious message on their page with a countdown heading towards today. It didn’t stayed long enough as a mystery among Nokia fans due to some goof-ups (?) from Nokia side itself, when they accidently leaked the name "Belle". 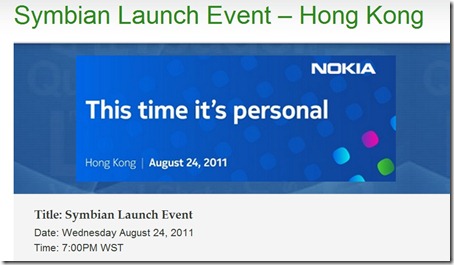 Even though I am rarely blogging nowadays due to office things, but like always I been active on twitter @nkumar_ and like others I was also wondering about the message "This time it’s personal" and even sent a "funny" tweet as well. Though I am yet to figure about the exact motives behind the tagline, Google sent me to this link that was written by Chief Scientist, Accenture long back in 2009. Not sure, but was it first sign of Accenture’s involvement in Symbian?

Anyway, the news is bigger than these small speculations… it is about Announcement of three super cheap smartphones equipped with well awaited Symbian Belle (Yes! you are reading it right.. Symbian Belle, I know even Symbian Anna roll out not finished yet). So let’s talk about the new joinees first.