Yes! Samsung Galaxy S will be yet another name you will keep hearing  from now. For some, it might come as a surprise, for some it might bring a big smile on their faces and for almost all of the readers, it would kindle an utmost interest of my impressions about it, not the hardware but the software, Android. I know what are the expectations here, but you have to wait and don’t worry, I have bought it, so it’s not going to run anywhere. 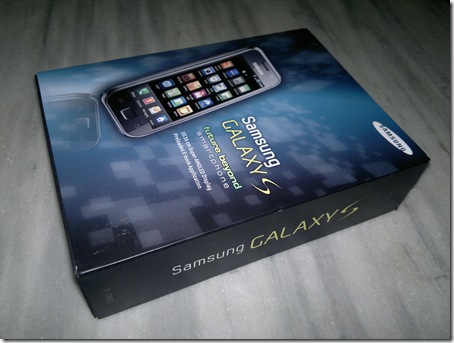 The first thing that comes into one’s mind [those who know me pretty well], like how @m_krishna obviously commented, why to purchase? Then, it wasn’t an easy decision for me, considering the price of it. It costed me around 25,000 Rupees :(  But I had to do it someday, Indian PR agencies weren’t easy enough to approach and many of you really wanted me to have my hands over Android, WP7 and iOS as well. Above all, I bought it as a gift to someone special, so it’s worth all the price, isn’t it?

While the front cover of package reads “Future Beyond Smartphone”, it was interesting to see the detailed specs on the back as this is something that Nokia always been shy upon (obvious reasons, even if their implementations are one of the best).

The mention of Exchange ActiveSync (Gmail) alarmed me a little as with Nokia when it comes to mail, all were allowed, be it Gmail or Ovi. But such things will be discussed later as I am completely new to Android as of now.

If I compare the packaging of the S with that of the Nokia N8, I must say it’s slimmer in width but taller (will see the handset later on) and shows off the apps pretty much, than the minimalistic Nokia.

While the Galaxy S package is slightly thicker than the Nokia N8, you know the device is just 9.9mm thick. It surely makes you feel that it’s going to be a treat to see and use.

So as of now, that’s all from my side. We’ll have to wait till the one for whom I’d purchased this this sees it. Sorry guys.

But I do know, you want to hear my words, you want to hear many many things. So, the time starts now, I need your help here. In the next one week, send me some comments about the device and what I should write about or what I should focus on while reviewing. I want my review to contain your content, from all the people who wanted to know about Android from the perspective of a nearby friend witnessing it.

15 thoughts on “Yes, You heard it right- Samsung Galaxy S is in the house”