The looks that will make you believe in things like Love at first sight, the price that make you fear that will you be able to get one before the stock runs out, the big amoled multi-touch shiny screen that find you only dreaming that how will be that like touching to it and a 12 MP with amazing build, which keeping you on toe that when you will get that one to make others envy. Yes!! I am talking about Nokia N8. 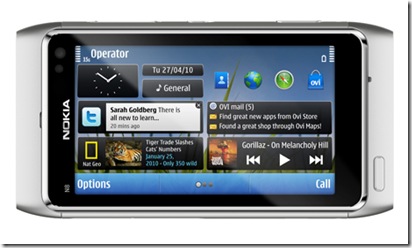 But hey!! wait a little, there might be another news in the corner, something else coming to India sooner than that. Yes!! that thing is known to be Techie’s best dream and opening new possibilities by each next day. Yes!! You guessed right, its Nokia N900. I already wrote that there are strong hints that it might land to India very soon and someone also said that price might be around 26-28k. So, which one you will buy? Nokia N8 or Nokia N900?

Interesting is that I haven’t seen a single person that might be ready to change his Nokia N900 for any other phone, either it be iPhone or any Android. Its really something that is growing like some wild fever without being hyped or even without that much backing by the manufacturer itself (unfortunately). We were really tired of hearing thing around iPhone that I got this app, I bought that app, how cool this app is and blah blah … but with Nokia N900, some new and real world seems to be opening. With a closing of around 3-4k price difference, Nokia N900 seems to be all set for keeping consumers highly confused about the choice between the two flagship models once N8 arrives.

I thought that its right to compare the two around the features offered and possibilities here as definitely a new debate is just around the corner that which one should be bought now?

1. Design, Build and UI: There will always be views that what is better, having a awesome physical keypad with you to make most of typing or having a shiny touch screen, that keeps your fingers always etching to slide on? Nokia N8 so far sure ride on the best build from Nokia so far, sure rising the bar much higher than the last Flagship Nokia N97 MIni. More of it, nothing seems more solid than a closed one piece build like Nokia N8 has. But at the same time, you can’t write off the tough male look of Nokia N900 as well. Nothing seemed as solid before. I guess it’ll be left over the choice of individuals. 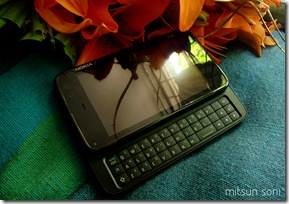 On the other side, Nokia N900 houses such a nice keypad that people even might crave for something like same on now days Netbooks. It will be seriously interesting to watch that how will a touch screen keypad will fair against something this much awesome, when currently Nokia seems not support multi-touch of keyboard (No Ctrl+C).

Take a look, I am comparing Touch UI’s of Android and iPhone with Physical Keypad of Nokia N900.

Definitely, for many its not a pleasant sacrifice provided the studies that says touch keypad are less efficient than physical ones and it keeps the rumors on for the next NSeries device Nokia N98 with Symbian^3, probably the same 12 MP camera, but incorporating physical keypad with same sleek design (Check the pics). 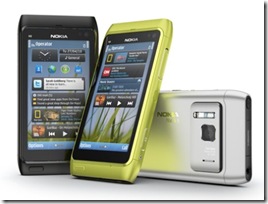 Well! personally I really wish to see that how touch UI keypad of Nokia N8’s big screen will fare against Nokia N900’s real convenience that kept me writing many blog posts directly from Nokia N900 only.

Next is about UI, honestly speaking, we haven’t seen much of exciting things about Symbian^3 except that multiple desktop thing. Reason is, it was the Russian site that prompted Nokia to go for announcing the half baked phone, otherwise when Vladislav Savov of Engadget visited Nokia HQ, then he was not presented with a proto-type with NOT working UI, sure a sign that the OS not fully operational yet.

Accept it, till now Symbian^3 might have excited the world in conversations only, yet it remained much to show off in pictures and video, where if we compare the same with Maemo, then we already seen that what wonder could be done with a mere Non-Capacitive UI. Definitely Symbian^3 needs to surprise us hard, if wanted people to forget Maemo for Symbian or MeeGo.

I will say even if lighter weight and sharp build Nokia N8 catches the eye instantly, Nokia N900 keeps the trust with majestic keypad, while Symbian^3 yet to show its full glory, definitely its gonna be hard to ignore N900’s magical Maemo.

2. Connectivity: One of the first phones to support Bluetooth 3.0, USB on the Go, HDMI and all of the other connectivity options that Nokia N900 supported, Nokia N8 is sure ready to hit the competitors big time. Many people says that Nokia like to tick all the checks in specifications and even after doing all end up doing things just ok or badly. But this time, its something seriously to be watched out. It sure beats even Nokia N900 in this department and sure lovely because at least on Symbian, we could expect a perfectly working Radio App for receiving/ transmitting and may be my personal favourite Google Maps app.

For me, I wish to see that how much battery will fair using all these connectivity options as in case of Nokia N900, I have seen that if I keep on using 3G on full go, then it ended up draining the batteries even if being continuously charged by being connected to Laptop. What about the 1200 mAh battery of Nokia N8 in comparison to 1320 mAh of Nokia N900?

3. Touch Vs. Multi-Touch: Nokia definitely has surprised many by announcing Nokia N8 in a price of around 22, 000/- even when packing other first in world features like Bluetooth and a 16GB memory. Fight will be with now more equipped iPhone 4G touch experience, but many expect Nokia be more ready this time through considerable inputs from touch design of N900. 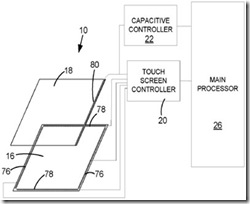 Nokia N900 sure came to re-define the touch for Nokia and it has to move further with Nokia N8 even if that might be an entirely another OS. Multi-touch really re-defines the meaning of touch and the same kept iPhone ride on market big times. Sure, Nokia N8 with good things added from N900 will come to provide more lighter feel of Multi-touch. Perhaps much of reasons to buy it.

4. Maemo Vs Symbian: Maemo is probably the biggest reason behind the new hopes with Symbian^3, otherwise many had given up over Nokia that inspite of good hardware and best of the prices. Experts and bloggers called it Nokia’s obsession with Symbian that’s making it loose the grounds in front of revolutionary Android or iPhone OS. 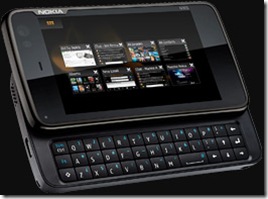 Arrival of Qt was to bring some hopes and probably with Symbian^3, we could expect to see that in full glory, but still Nokia N900 will stand tall with its Open source and very much user familiar Maemo in front of Nokia N8 and Symbian^3. Probably one of the biggest reason that we are calling for some kind of comparison here. Openness of Maemo is something that couldn’t be compared with anyone. In spite of early bugs and complaints about immaturity at places, only Maemo has bring the scenario that at each next day, we hear about new people doing new things with their Nokia N900.

Many will voice my concern that they fear if with Meego, they gonna loose the same flexibility that Maemo provided and so have their reasons to stick with Nokia N900. Not only Geeks, but even normal people love Linux based Maemo, because its the only place in Smartphones, where you could expect some multimedia player playing all kind of multimedia files, where you could expecting getting some free program to record the calls as easily as you were on some Desktop, only thing that could let you check the logs if something went wrong.

Yes!! we want capabilities of Nokia N8, but still we love Maemo’s openness more. It remains to be see that who will win?

Lots could be said about these and I just wished to point the debate that would take place over web very soon, when Nokia N8 trial units will be out and people will get a feel of real things. Let’s see, who will go more strong? Will after the early excitement with Nokia N8, Nokia N900 will still keep world’s interest in it or Symbian^3 will come to change the game?