Finally this was the day for which kids been waiting for. Sand castles on sea beach, but they had to wait little more as elders needed to visit Rameshwaram temple. No photos as cameras were not allowed in temples. We woke up early, taken bath, did Manidarshan, but going for “22 Kund snan” was kind of tough with kids around so we chosen the short route. By some 8.15 AM, we would have been free to drive again after checking out from hotel. 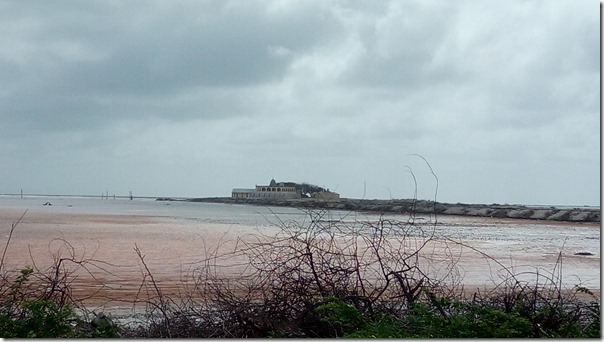 We reached Danushkodi by 9 AM where we were stopped some 5-6 kms before by a check-post in name of “Road construction” which meant we weren’t allowed to go further at this weather at least. An impromptu parking spot it was from where pvt ferries used to take people to a certain point (Not the last end) on a cost from off-road route. It might look like just a line in maps, but including the shores, its around 500 mtr wide place which stretches around 7kms from north to south. It shares ONLY land border between Sri Lanka and India which is one of the smallest in world at 45 mtrs in length. (of course we didn’t made it to that point). 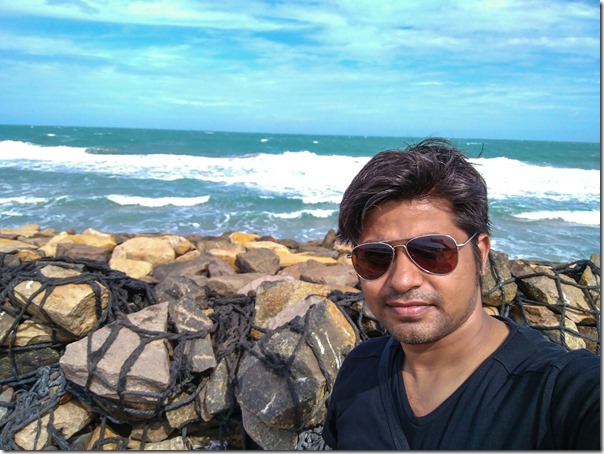 This place is actually called as “Ghost Town” due to a tragedy back on 22 December, 1964 which wiped out roughly 1800 people including those 115 passengers on Pamban-Dhanushkodi passenger train. After that railways station was wiped out and the train never began its operations. A commission looked into possibility of new rail in 2010 and last year a road was constructed till this point. 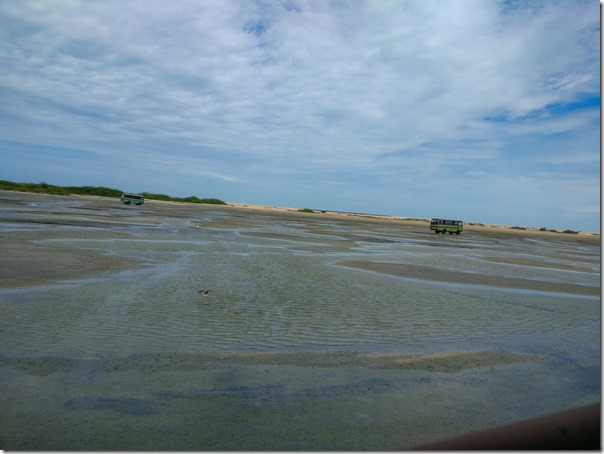 Interestingly, while one side of sea remains violent, the other side remains this calm that ferries actually drive in sand on that side for roughly 5kms to take you to a clean water beach. In above pictures, you can understand that our ferry was driving almost touching sea line.

Going in ferry means time was limited to be there, which was disappointing but still it didn’t stopped kids to have extended fun there. Why to blame kids alone? 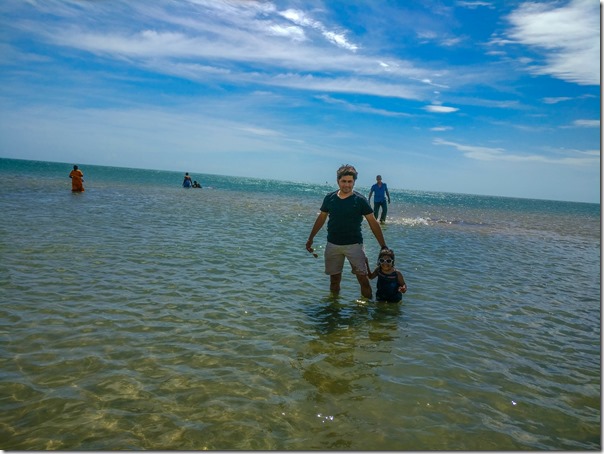 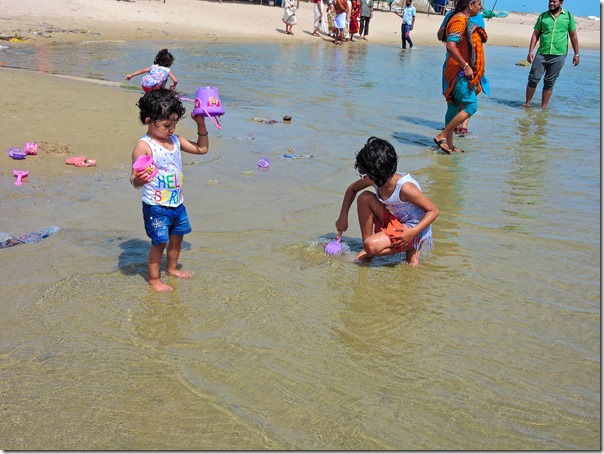 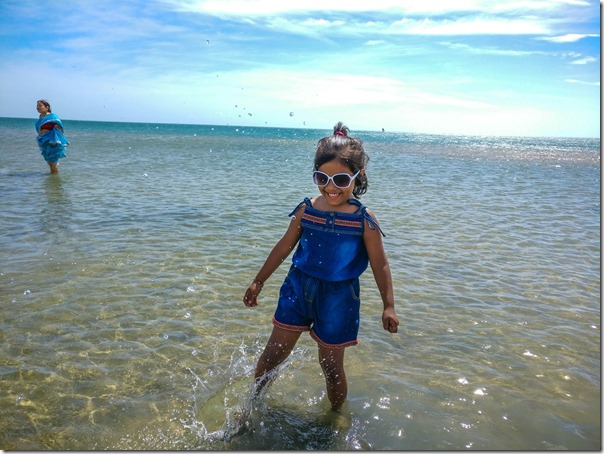 11.45 AM and we were back to parking point to take some snaps at other side of sea. 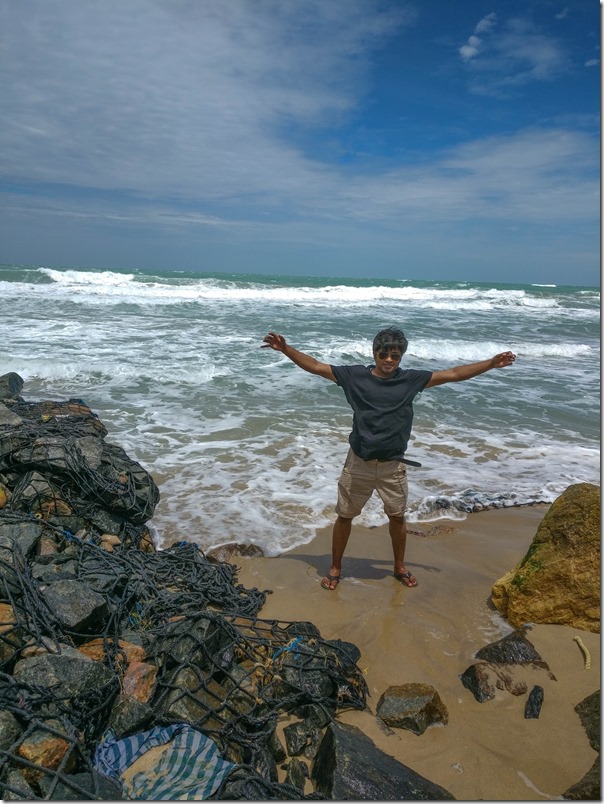 It was time to move to Kanyakumari next and we were at Pamban bridge by 12.45 PM to take some photos which we missed last evening due to low light.

Its a quite jam prone place still traffic cops remain tolerant of people stopping at bridge till it doesn’t choke. 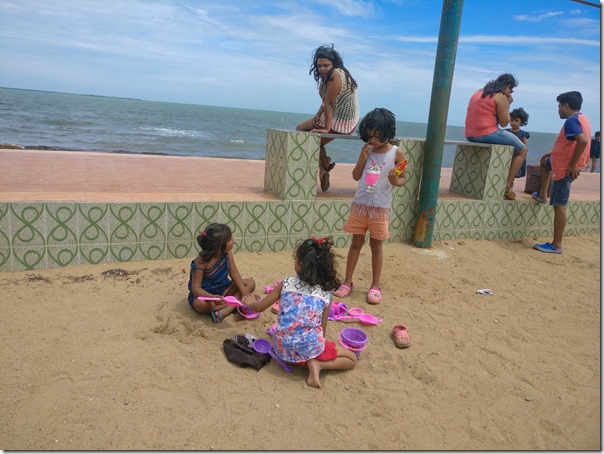 We took a stop to rest at a park just after the bridge I think where kids needed to vent off their energy as they didn’t got enough of sea at Dhanushkodi. We must have left the place by some 1.30 PM around. 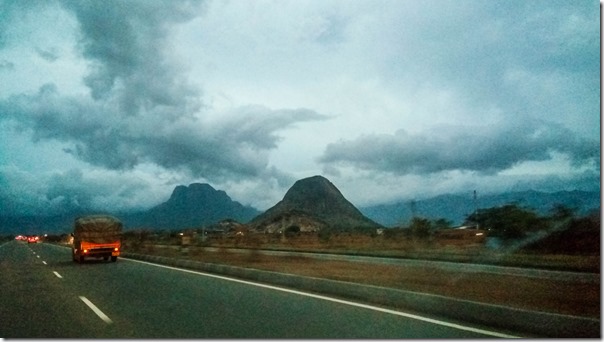 The thing about driving in south or may be the particular routes we were on is roads of Tamilnadu are just top notch (can’t say same for Kerala), not only quality of roads but the scenic views across that you just don’t get tired.

That’s where I realised the stark difference in i10 and a car like Vista. i10 was reaching its limit after 120kmph and heavy wind was able to push it to side while that never happened with Vista in any of my trip. Vista was always able to give me as much power whenever I wished, almost no vehicle I could not overtake on such roads with Vista if I wanted so.

Anyway, deviating from the topic again. Till the time we managed to reach Kanyakumari, it was dark. We faced the battery issue once again and it ensured that we needed to replace that on next day morning. 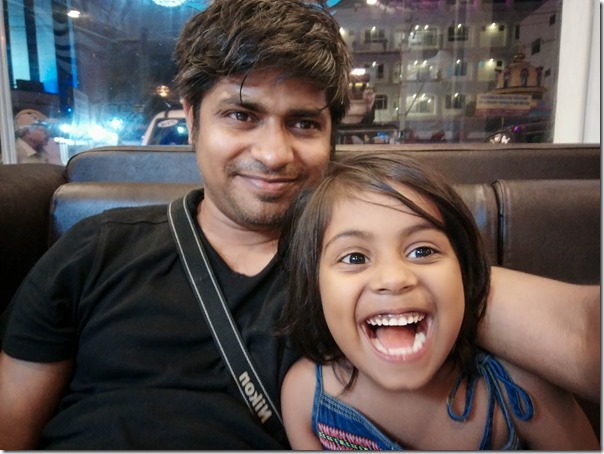 We reached Hotel Ocean View by 7.45 PM, which was at walking distance from Vivekananda Memorial spot. There were hits and misses about the dinner but finally it was North Indian. We wanted to visit the sea during night but then possibly we all were too tired for that.

Next morning we had to woke up early for getting a good view of sunrise.